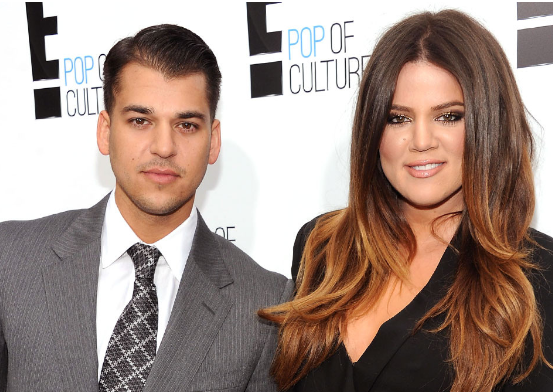 Khloe Kardashian And Kourtney Kardashian Make It Clear On Twitter: They Don’t Think Blac And Rob Are Truly In Love! It looks like those naughty sources might have been right. We have been hearing for a few weeks now that most of the Kardashian family (especially Khloe) don’t approve of Rob’s new relationship with Blac Chyna. There are several reasons they disapprove, but one of the main reasons is they believe Chyna is using Rob for attention and to get back at the family.

Obviously, Rob doesn’t feel this way because he’s happier now than he has been in years. He is finally getting out of the house, hitting the gym and even smiling! Yes, that is correct…Rob posted a photo of himself smiling.

The photo was shared on Blac’s Snapchat on Thursday. LOOK AT HOW HAPPY HE IS! But as we mentioned above, the Kardashian family believe this happiness won’t last long. Khloe went on her Instagram account yesterday and posted a throwback photo of her and her brother, with the caption, “It’s simple…I miss you.”

She also shared the photo on her Twitter account, and that’s where things got really interesting. Kourtney replied to the tweet by saying, “True love,” followed by a series of emoji crying faces.

What does this tell us? Well, obviously it tells us that Khloe misses her brother and probably hasn’t seen much of him since he started dating Blac. It also seems to confirm the reports from the sources who claim the Kardashian family believe Blac is just playing Rob.

The “true love” comment from Kourtney appears to be a direct jab to Blac’s face. They better watch it though. There aren’t a lot of things that can make a man turn his back on his family, but a woman who showers him with love and attention is one of those things. That and stuffed-crust pizza.

If Blac truly does love Rob, then the Kardashian family must accept it and welcome her to the family if they want to have a healthy relationship with Rob.