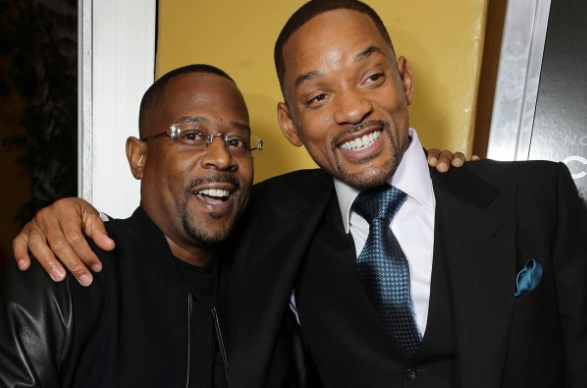 Will Smith And Jerry Bruckheimer Meet Up To Discuss ‘Bad Boys 3’ — Here Is What We Know! Okay, so you probably heard about Will Smith’s interview back in early February on BBC Radio 1. He talked about a number of important topics during the interview, but one of the most exciting things revealed was that Bad Boys 3 was “definitely” on the way.

The 47-year-old actor talked about meeting with Martin Lawrence for the first time in two years, “We just looked at each other. We hugged. In that moment, we knew we were making another Bad Boys. We’re definitely doing another one.” He said.

Of course, at the time it kinda just seemed like something you say after getting together with ‘the boys’ again. You start reminiscing about the good ol’ days and you start saying things you don’t actually mean just because you’re so excited.

But it looks like Smith and Lawrence are serious about this. According to a report from TMZ, Smith had a few “marathon meetings” with Jerry Bruckheimer to discuss the details surrounding the upcoming film.

On Tuesday, they talked for over four hours during dinner, and then they met back up for a long lunch the next day.

Sources say they not only worked on contract details, but they also spent a few hours working on the script. You can watch the video below, which shows Jerry leaving the second meeting on Wednesday.

He tries to play down the rumors, but sources say it’s pretty much a done deal.

The first Bad Boys film was released way back in 1995. It was followed by the sequel Bad Boys II in 2003. Both films were produced by Jerry Bruckheimer and directed by Michael Bay. The franchise has never scored well with critics, but that doesn’t matter because the general audience loves the movies. The second film was a huge box office success, bringing home $270 million worldwide.

We will of course keep you posted!