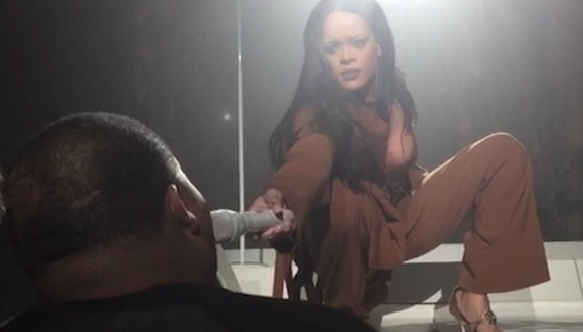 LIFE CHANGING: Fan Who Stunned Rihanna with His Vocals Gains Instant Fame, And the Boy Can Actually Sing! (Video) It all started during Rihanna’s concert on Saturday. She was doing a show in Ohio at the US Bank Arena in Cincinnati and started to sing the song FourFiveSeconds. As she begin singing the lyrics, she got into a squat position and held the microphone in front of a fan….and this fan blew her away with his vocals. I’m sure by now you have seen the clip, but just in case.

Look at the expression on Rihanna’s face! We now know that fan as none other than Terah Stewart. Stewart is the Assistant Director of intercultural Programming at Ohio State University. Just after the moment happened, Stewart went to his twitter to live tweet to his followers:

This was a dream come true for Stewart, but only the beginning, we hope.

Stewart is now a celebrity. He has been interviewed by newspapers and even TMZ. He told TMZ that he hopes the moment will take him to Broadway. The local news did a story on Terah and revealed that Terah is a lifelong choir student that can really sing. Here is the news piece – notice when Terah explains how many followers he had on Instagram before Saturday and how many he has now – Instafame!!  Watch: