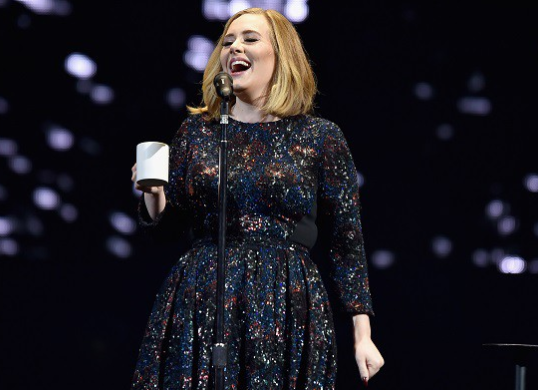 Adele…Twerking? It Happened During Her Sold-Out Concert In London! Check Out The Video Inside! We have seen Adele sing her ass off on stage several times, but we have never seen her shake her booty during a concert. There is a first time for everything though, and Adele surprised some extremely lucky fans at London’s O2 Arena with some dance moves we never knew she had.

While taking a break between songs, the 27-year-old singer decided to joke around with her fans. And during the joking, she shocked herself by accidentally twerking.

“I think I just twerked.” She told her fans, but they probably didn’t hear her because they were too busy screaming for more. And surprisingly, she pulled out the twerkish movements one more time, and then admitted, “I can’t do it that well.  My whole body has to move. My bum could break my back it’s so enormous.”

Adele managed to make twerking adorable. I didn’t think that was possible. Adele seems to be having A LOT of fun during her sold-out world tour. Every night has some surprise thrown in.

It was twerking the other night, but just last week she invited a couple on stage who just got engaged. She stopped her set just to interview them and find out a little more about their life. She discovered that “Make You Feel My Love” was their song.

Check it out below. The good stuff happens a little after the 3-minute mark.