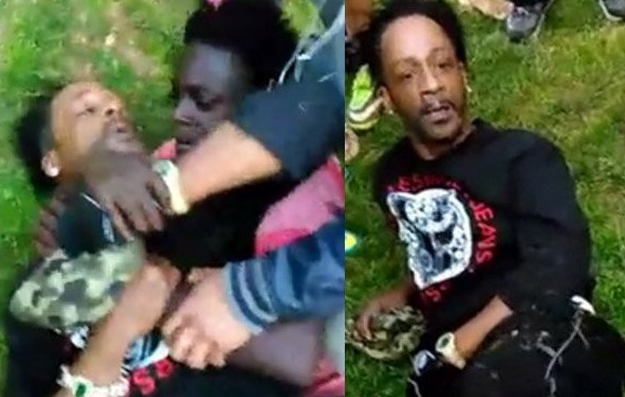 Katt Williams Gets Choked Out By A 7th Grader After Trying To Land A Sucker Punch, WE HAVE THE FULL VIDEO! Katt Williams must be a freaking magician because he continues to find bottoms to hit. Most people hit rock bottom and then they slowly pull themselves back up, but Katt is slamming so hard against the bottom floor that he’s falling through and creating a brand new bottom.

Early Wednesday morning, a series of insane video clips went viral featuring the former comedian arguing with a 7th grade student in Atlanta. According to TMZ, he was handing out cash to people in need. We’re not exactly sure what went wrong, but Williams tried to land a cheap punch on the middle school student.

That was a bad move because the 7th grader absolutely destroyed him. This kid choked his a** out. Watch the clip below…

Even though Katt is the size of a 4th grader, it’s still shocking to see a grown man get destroyed by a kid who is probably 12 or 13-years-old. TMZ claims police have watched the video and they’re launching a criminal investigation with Katt as their target.

As most of you know, he’s been arrested several times the past few months. You can read more about his troubles by clicking here and here.

The dude needs some help. He’s going to mess with the wrong 2nd grader one day.