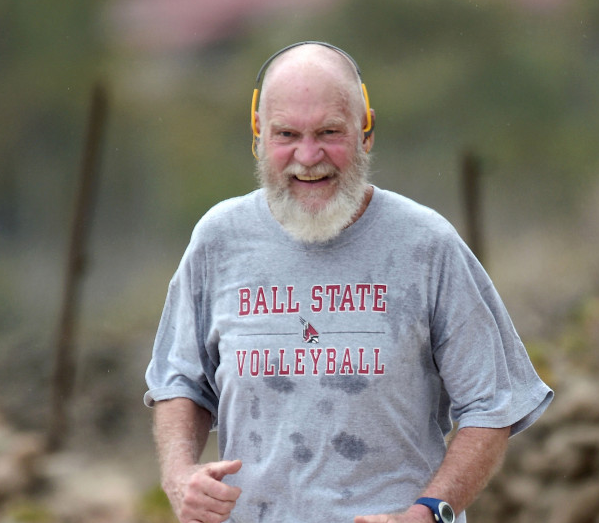 Yeah. That dude you see in the photo above? That’s David Letterman. The photo, which shows the retired late-night host jogging on the Caribbean Island of St. Barts, has been shared all over the web this week.

People are shocked that he looks so different just 10 months after saying goodbye to The Late Show. His beard should probably have a cage around it, he appears to be completely bald and where the f–k are his glasses? I didn’t know he was allowed to take those things off.

For those wondering why he decided to let his beard get so out of control, it’s because he’s tired of people saying he should shave it.

Back in December, when his beard was just a harmless puppy, he told the Whitefish Review the following: “I’ve kind of developed a real creepy look with it that I’m sort of enjoying. I can tell that people are off-put by it. And the more people implore me to shave, the stronger my resolve is to not shave.”

We can respect that. You know what else we can respect? Talking smack, and we’re going to talk some smack in a way Letterman will understand. No. 9 – Santa Claus After Trying To Deliver Presents To Kevin’s House No. 8 – Your Sleepy Grandfather No. 7 – The Star Of The Next Life Alert Commercial

(Can you tell a writer made these photos? I tried. Honestly…) No. 5 – That One Walmart Greeter Who Never Checks Your Receipt But Always Checks Out Your Girlfriend’s Butt No. 3 –  A Walker (Jogger?) On The Walking Dead (We can pretend I butchered his face on purpose) No. 2 – The Star Of An Erectile Dysfunction Commercial Produced By Blumhouse Productions

And the number one thing David Letterman looks like now that he’s retired?