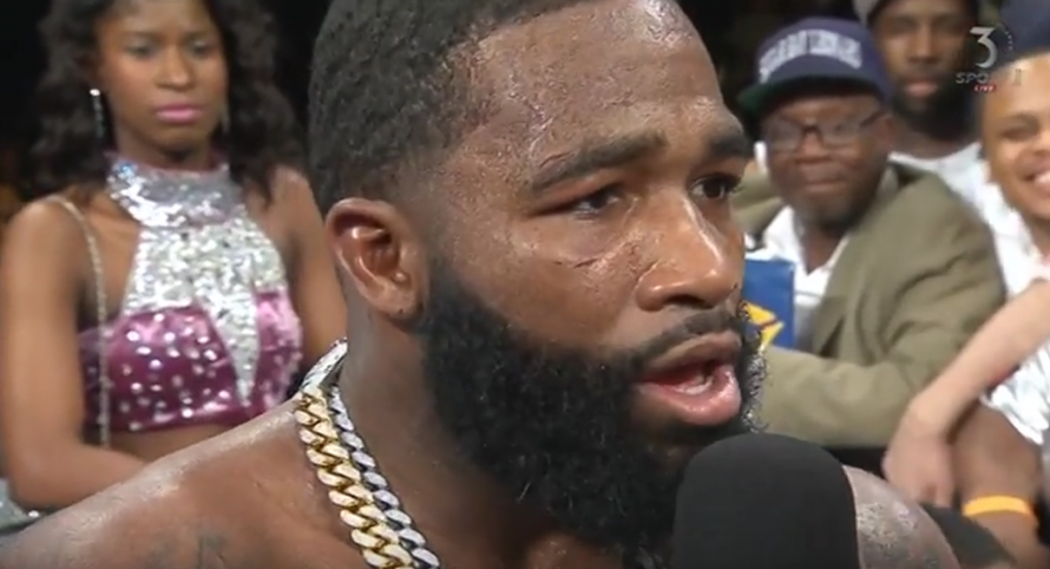 And Then This Happened! Adrien Broner Wins and Calls Floyd Mayweather Out to His Face – “If We Sparring or if We Fighting” (Post Fight Video) And the Saga continues……

In case you haven’t been keeping up, here is the chronicle of events between Floyd and Broner this week:

We have reached Chapter 3.  I’m going to go on record saying that this is probably not final chapter.  I can’t say that I’m surprised that Broner beat Theophane last night nor am I’m surprised by his post-fight antics.  Broner is a good boxer and he was expected to win, which makes everything else that he does even more tragic.  If he worked half as hard on his technique as he does on this cheap Hollywood persona, he would be a lot further in his career. This was just another symptom of his head not being in the game.  The fight weight for this bout was 140 pounds and Broner weighed in at 140.4 lbs.  After refusing to drop the extra .4 pounds, he was forced not only to hand over $50,000 of his purse to Theophane, but per the World Boxing Association rules, he also had to vacate his super lightweight title.

In pure Broner fashion, when he found out he didn’t make weight, instead of putting on a sauna suit and doing a few laps to get the job done, he jumped off the scale and gulped down some Gatorade and then stormed out.  $50K to Broner is pennies, or at least that’s what he would like us all to believe.

Broner’s trainer, Mike Stafford spoke on the fighters behalf at the weight-in.  He said,

“It is what it is. The kid chose not to go on and abuse his body (by trying to lose the weight). And hopefully the fans and sportswriters understand that he’s been going through a lot and has a lot of things on his mind,” Stafford said. “Hey, we’ll go on and put on a good show tomorrow. Main thing is, the fight’s still on, and the kid will be ready to fight.

It’s just all the stuff that’s happening. And it happened so quick. I can say this: We were on course to really have a good fight before this stuff came out last week. . . . People don’t realize that even after the fight, he faces a tough dilemma, and hopefully his lawyers can get him out of this situation. “

BRONER STOPS THEOPHANE BY TKO IN THE NINTH

As expected, Broner was able to stop Theophane.  In the ninth round with a left uppercut to the body, Theophane’s dreams were instantly shattered.  The fight was stopped and Theophane thought the stoppage was premature.  He told the press,

“I thought I was in the fight. Me and Broner were going at it. It looked like he was starting to get tired because he started to move around and wasn’t able to stay there with me as much.

No way should that have gotten stopped. It’s a shame the referee did that. I was telling him ‘I’m okay, I’m okay’ then he waived it off. I don’t know what he was thinking.”

AND NOW THE VIDEO YOU HAVE ALL BEEN WAITING FOR

This victory leaves Broner with a record of 32-2, with 24 knock outs.  That’s super-impressive.  The sad part is that no matter what he does, he will never be able to match Floyd’s undefeated record because he has two losses.  This didn’t stop him from calling out the 39 year old, undefeated champion during the post fight interview.  Here is the clip.  Watch Floyd’s reaction.  PRICELESS.