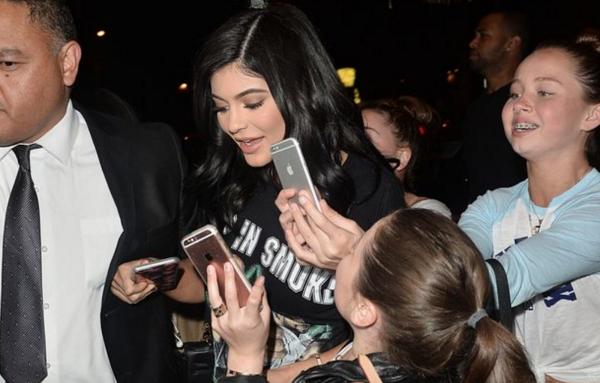 If you haven’t noticed, Kylie Jenner is a big deal.  And if you also haven’t noticed parents will do just about anything for their kids; even if that means leaving your farm to travel into ‘these here city parts’ to get an autograph and a possible selfie with their favorite celebrity.

The video starts with a quick interview of three adorable Kardashian/Jenner seedlings.  These are the seeds that Kris Jenner plants and nourishes so that when they grow up they spend their hard earned paychecks to buy products that she has all her children creating and distributing to millions every day.  That woman is a genius!  These seedlings should probably be in bed, but somehow they found out that Kylie was in the area and they were determined to get a selfie.  Don’t worry about their safety – Grandpa is there, and little did the paparazzi know, Grandpa can throw hands.

When Kylie comes out, Grandpa is all business.  Kylie actually takes a selfie with the children before things get crazy and Grandpa is on point.  To make sure the selfie comes out just right, Grandpa pulls out his standard AARP issued mag-flashlight and shines it on Kylie and the grandkids insuring that everything is picture perfect.  And it was, until the paparazzi also saw the picture as perfect and tried to step in.  The old man pushed them back and that’s when things got crazy.  And if fighting in front of the kids weren’t enough, Grandpa had some first class trash talking to back things up. At the end of the video, you can here Grandpa telling the Paparazzi to “Get a real f’n  job”.  I’m sure those children learned more in one day, then they will for the rest of the school year.   Watch and learn for yourself: Who is Colin Tilley? Tilly is a 27 year old video director who has worked with the likes of Chris Brown, Nicki Minaj, Zenday, Tyga, Jason Derulo, Diddy, and the list goes on. He was also the man behind Niki Minaj’s Anaconda video but I won’t hold that against him.

It’ s not clear where this video will be shown other then on Youtube, but…(Read More)