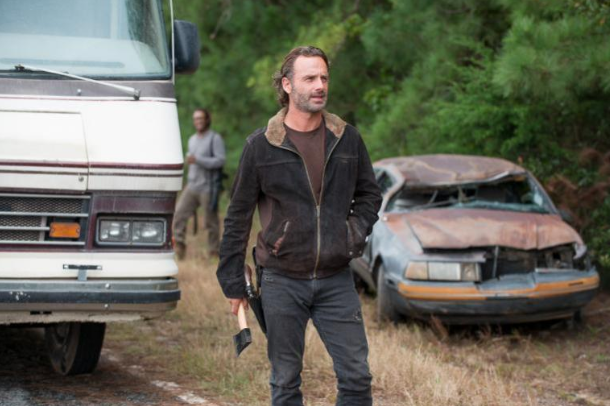 Still Upset About That Walking Dead Season 6 Finale Cliffhanger? Find Out How The Creators Are Defending The Move Obviously this post is going to contain some spoilers.

The moment we have all been waiting for finally happened last night. Well, at least part of the moment happened. Fans of The Walking Dead were introduced to Negan and his little friend Lucille. And let’s be clear here, Jeffrey Dean Morgan was absolutely incredible as Negan, and it’s clear casting him as one of the most feared characters in the entire series was a great decision.

But was that cliffhanger a great decision? It doesn’t look like it. If you’re reading this, then you should already know that we didn’t actually get to see who Negan was beating with his barbed-wire bat. The finale ended with a POV shot.

It was a decision that made absolutely no sense to those who have read the comics. This was THE moment. It could have been one of the greatest moments in television history, but instead the creators decided to basically hit the pause button for six months.

It’s like pouring a bowl of cereal every single day for six months, but you never get to eat it. It’s like going out to check your mail every single day, but once you get to the box you turn right back around without actually seeing what was inside. Fans are REALLY upset, and some extremely passionate fans claim they are going to quit watching the show. Of course, we all know that’s not going to happen. You just can’t quit The Walking Dead. And the creators know this, which is why they fear nothing.

Creator Robert Kirkman and executive producer Scott Gimple were on Talking Dead directly following the disappointing finale, and they tried their best to defend the cliffhanger. Kirkman told host Chris Hardwick, “As a fan, I love cliffhangers. I love that tension. If you read the comic books, pretty much every issue ends with a cliffhanger. I think that’s a lot of fun.”

Oh yeah, Kirkman? Tell that to this angry Twitter user. Does it look like he’s having fun right now?

But to be fair, Kirkman claims this move was all about the story. It had nothing to do with ratings.

The cliffhanger isn’t the story. This episode is about the loss of that confidence. It’s about tearing Rick Grimes down, and that’s the conclusion of this episode. The story of who died, of what comes next, of who Negan killed, that’s really the story of season seven.

I get it. I don’t like it (or support it!) but I get it. Honestly, I feel like the death won’t be as emotional now. It won’t have the same impact.

We have to do something so great and so intense that you’re like, OK, all right, fair play, and that’s the challenge that we have. We’re going to do it, we’re going to deliver you something fantastic. We want you to be one of those people in that lineup.

WE WERE ALREADY ONE OF THOSE PEOPLE THOUGH! YOU HAD US! YOU HAD US AT PEE-PEE PANTS CITY!