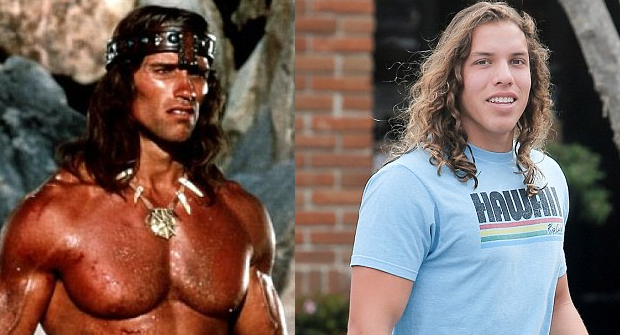 Insane…Arnold Schwarzenegger’s 18-Year-Son Looks Just Like His Father Back In His Glory Days! (PHOTOS) And now Joseph is 18-years-old and looking more like his father every single day. Photographers spotted him hanging out in Malibu earlier this week, and he looked remarkably similar to his father’s Conan the Barbarian look.

As you can see by the photos, Joseph is looking quite strong. He’s clearly been lifting them heavy weights in the gym. Sources say Arnold doesn’t have the greatest relationship with Joseph. He did buy him and his mother a four-bedroom home as well as a Jeep Wrangler Rubicon; however, the emotional connection isn’t there like it is with his other kids.

As some of you may remember, the world found out about Arnold’s affair with Mildred back in 2011 not long after he and Maria Shriver announced their separation. In his autobiography, Arnold admits he kept the affair a secret from Shriver for years.

The truth was finally revealed in a therapy session..

The minute we sat down, the therapist turned to me and said, ‘Maria wanted to come here today and to ask about a child — whether you fathered a child with your housekeeper Mildred.’

Hopefully he and Joseph can develop a stronger relationship as they both grow older. It certainly seems like they would enjoy working out together.