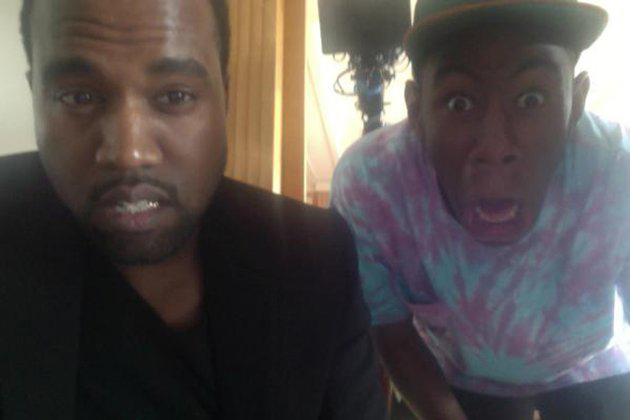 Meanwhile At Coachella: Kanye West Challenged Tyler The Creator To a Foot Race, And We Have Video!! We all know that Tyler respects Kanye the way that Kanye wants and feels he deserves to be respected.  If you remember (or might not) he called Pharrell and Kanye “Dads” after posting a pic of the two on Instagram.

When asked what he met by that, he said,

Seeing those two in a photo together, that really meant a lot to me and there’s not that many photos of those two.

There’s one photo in Japan at the Ice cream store opening, a couple of other photos of them floating round too but seeing that photo in 2015 it’s like they’re still chewing it and they’re still friends, it meant something to me.

It’s like no matter what I’ll be I guess I’ll always be creating and I’ll always try to do that at an awesome level, so seeing those two try to do that. I mean I look up to them so much and they know that they’re fucking gods. I love that photo that’s cool!

That gives you an idea of the level of admiration Tyler has for Kanye, which I’m sure puts Yeezy at ease.  Hanging with Tyler he probably feels he doesn’t have to prove himself artistically but physically….that’s a different story.

During some downtime the two challenged each other to a footrace and given the age and weight advantage I’m sure you know who won, but I would say, Old Man Yeezy was quicker than I expected.

Watch; there are two videos…and this is the best part of the story. You will see in the first video that someone gets in the way.

That someone took the 2nd video which gives us a much better video but it ruined the race. I’ve learned by now, when things like this happen, there are 100’s of videos that surface and I was able to find the one taken by the guy who got in the way and his caption was great.

While at Coachella with my brother Dj Mustard we all were chilling behind the stage after ASAP Rocky.

Of course Tyler being the happy spirit he challenged Ye to a foot race.

Unfortunately I got in the way lol. Crazy I spent $2,000 on the 750s last week and this week I run into Kanye. Literally.