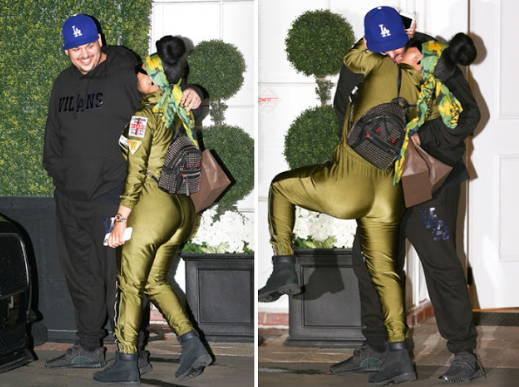 A Brand New Rob Kardashian: Video Shows Him Talking To The Paparazzi About His Wedding And Diet!

Someone needs to give Blac Chyna a big ol’ trophy, because she has managed to turn Rob Kardashian’s life around in just a few short months. We knew from the sources and the photos that Rob was happier than ever, but now we’re hearing those words come directly out of his mouth.

He surprised everyone on Monday when he talked to the paparazzi at LAX. He was returning home from a weekend trip with Chyna to New York and Boston. And apparently, Chyna told him before they got off the plane that he was going to be the one chatting with the paparazzi.

During his convo with the paps, he reveals, “She’s leaving me to dry, she knows I hate talking to you,” but he didn’t seem to hate it that much. He talked about his wedding, his diet, what he eats for cheat meals, etc. He also said that he was “happy” about a thousand times, so it must be true.

It’s really neat to see Rob out in public like this. It’s probably ridiculous to say since I don’t know him, but he seems like a super sweet dude. A bit fragile, you know? Hopefully Blac doesn’t break his heart. He might not be strong enough to take that yet.