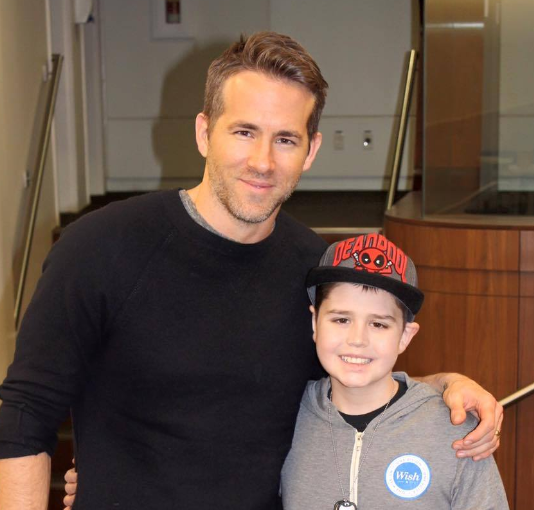 Cancer is like going to the grocery store and finding out your favorite childhood cereal has reduced the amount of sugar per serving and added in “heart-healthy” vitamins in its place. And then as you’re walking out of the cereal aisle, someone shoots you in the head, but the bullet somehow manages to miss all your important bits, so you end up living for two months in the hospital.

And just as you’re about to be released, a bowling ball falls from the top story of the hospital and smashes your head.

Basically, cancer is the worst, and no one should be forced to deal with it, especially little kids. But sadly, there are kids all over the world fighting cancer as we speak. And there is one special kid who just lost his battle with the illness earlier this week. He was the world’s biggest Deadpool fan, and thanks to the Make-A-Wish Foundation and Ryan Reynolds, he was the first person to watch the movie. The actor traveled to visit him and surprise him with a rough cut of the film, and it was during the visit that Reynolds realized just how incredibly special McGrath was.

“Connor was 13. But this kid… He was smart. He was funny. And not just funny ‘for a kid’—or funny ‘for a person battling something awful’. He was unqualified funny. He had that… thing. That thing you see in great performers or comedy writers. A running commentary/observational skill people are just lucky to be born with.”

He was constantly making everyone laugh around him. Reynolds says it was joke after joke with him, “While repeatedly punching cancer in the balls, he made everyone laugh. Including the entire staff who cared for him at Edmonton’s Stollery Children’s Hospital,” he wrote on his Facebook page.

Six weeks after Reynolds surprised McGrath with a special screening of Deadpool, he returned to visit him and he knew then that things weren’t looking good.

“I wish I could say things were looking up. After my visit, I didn’t know if I was saying ‘goodbye’ or ‘see ya later,’ Sitting here now, I realize it was both. I’m grateful I got to orbit Connor’s world for a brief time. Grateful for the pages and pages of hilarious texts between us. Grateful to his parents for allowing Connor to spend time with a foul-mouthed child in the body of a 39-year-old.”

You can read the full tribute by clicking this link. And you can click here to donate to Make-A-Wish.