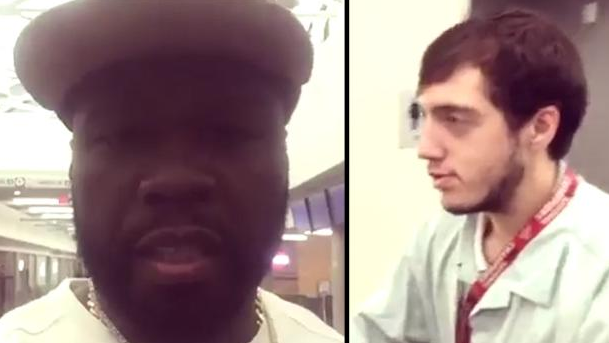 Well, it’s official. 50 Cent is a huge douchebag. The 40-year-old rapper has managed to reach a level of jerkness we didn’t even think was possible. He posted a video to his Instagram account showing himself mocking (and basically stalking) an airport employee because he believed he was extremely high.

“This new generation is crazy, high as a mother**ker,” 50 Cent says during the video. And throughout the clip, you can see how uncomfortable the employee looks. He’s trying his best to ignore the rapper, but ol’ Curtis just wouldn’t let it go.

After he posted the clip to his Instagram, one of his (former) fans called him out and explained to him that he actually went to school with the dude in the video.

His name is Andrew Farrell. He has extreme social difficulties just to let you know. He has a hard enough time getting through life without jackasses like you making fun of him. I hope you feel good about yourself. You just lost a huge fan.

Mr. Cent quickly deleted the video after people started blasting him, but it’s still being shared online thanks to YouTube. It’s difficult to confirm that this Instagram user does in fact know this guy, but it seems legit because there have been a few other people backing up his story.

But even if the dude doesn’t have “extreme social difficulties,” 50 Cent is still a jerk. How can he stand there and say, “this new generation is crazy” when he was a drug dealer himself? That would be like DJ Khaled walking up to an overweight employee while they’re eating a cheeseburger and saying, “Yo, man. This new generation is crazy. How many cheeseburgers you had today, bro? Be honest. You fat as f–k.”