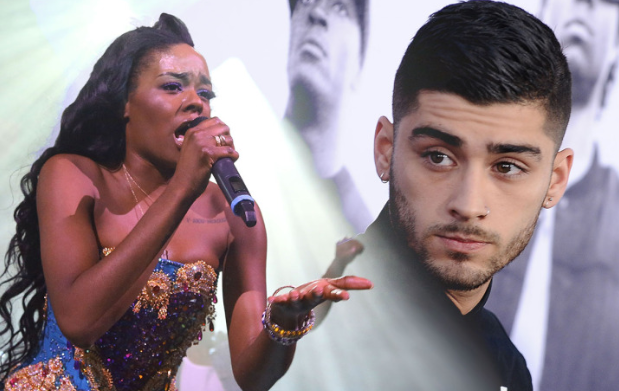 Zayn Malik Is Azealia Banks’ Latest Victim, And This Time She Went Way Too Far With Her Racist Tweets! I think it’s time we consider putting Azealia Banks inside a special home.

One that is free of any sharp objects. The 24-year-old rapper/part-time crazy person, went on a bizarre rant against Zayn Malik, and this time she might have pushed things over a line she’ll never be able to come back from.

It all started when Banks accused Malik of stealing her musical ideas, “Damn Zayn be mood boarding the f–k out of me. I’m not mad about this though. Zayn is a cutie pie.”

Okay. No big deal, right? Well, this was before things took a nasty turn.

After Zayn replied to her asking her why she was saying mean things about him, Banks responded with a barrage of disgusting and racist comments.

When your entire extended family has been obliterated by good ol the U.S of A will you still be trying to act like a white boy pretending to be black?

Do you understand that you are a sand n—– who emulates white boys’ renditions of black male hood? Do you know how lost and culture less you are?”

That’s shocking enough, but unfortunately she didn’t stop there. Malik replied to her with these two tweets… And it was at this moment Banks reached deep down and pulled out some of the most vile, racist sh-t we have ever seen. It honestly felt like we were at a Donald Trump rally. Is she trying to be his VP?

“Simmer down with that fake white boy rebellion and that wannabe beiber (sic) swag. Lol u a bitch n–ga for even responding like that. Keep sucking this yung rapunxel d–k u hairy curry scented bitch.

Wow. Even if she believes none of that and is just the world’s greatest troll, she might have pushed things a little too far. It’s hard to come back from that sh-t.