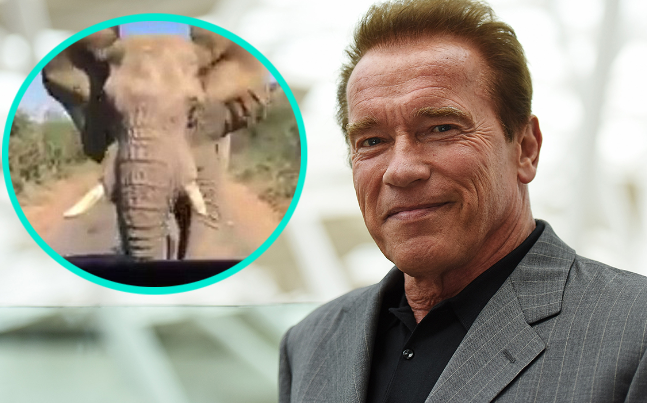 WATCH: Arnold Schwarzenegger Gets Chased By An Elephant In South Africa, And Now He Needs New Pants (VIDEO) When you’re as big and strong as Arnold Freakin’ Schwarzenegger, there aren’t a lot of things that can scare you. He could probably crush most humans with just one hand.

But during a wild safari encounter in South Africa, Mr. Schwarzenegger came face to face with a beast he wouldn’t be able to handle. As you can see in the incredible video below, Arnold’s SUV was forced to stop in the middle of the road because a large elephant was standing in the road.

The elephant started to slowly back up when the engine kicked on, and one passenger asked, “Is he backing up because of the engine?” And that’s when Arnold dropped this great line, “No, he’s going to charge us!”

And for most of the video, it looked as if Arnold’s prediction was going to be wrong. The elephant walked off the road and appeared to be walking away from the vehicle.

Pretty cool, huh? You know, if you’re one of those people who enjoy the pleasure of almost dying. In the YouTube description of the video, Arnold wrote that some people in the SUV needed new pants…

I couldn’t have written this safari encounter better if it was a movie. I’m absolutely in awe of these beautiful, strong animals, even though some of us had to change our pants after this.

The way he describes the elephant, it almost makes you question exactly why he had to change his pants. Your first thought is “poop!” but we’re starting to think Arnold just got a little too excited and possibly…