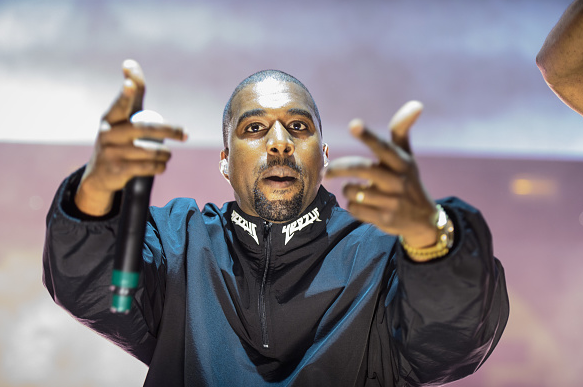 Kanye West’s Power Game Is Too Strong, Surprise Concert In New York Shut Down By Police After Near Riot (PHOTOS) Kanye West might have a lot of haters, but he also has a lot of people who love him unconditionally. They are willing to die for him, and some of them almost did in New York’s East Village. The madness started when Kanye’s gig at the Governors Ball music festival was canceled due to bad weather.

The 38-year-old rapper didn’t want his fans to be disappointed, so he spent all night figuring out a way to put on a surprise show. And for a few hours, it looked like he was going to pull it off. After playing a short set at the Hot 97 Summer Jam early Sunday evening, West announced a surprise show at Webster Hall at two in the morning.

Minutes later, as news spread on social media, thousands of people flooded the streets around the venue. In just one hour, the show was sold out, but people were still joining the huge crowd on the street. Reports from people stuck in the chaos claim it reached near riot conditions. A few people were even injured.

West tried to manage the situation by trying to convince the freakin’ mayor to shut down the streets so the fans who couldn’t squeeze in the concert could party outside the building.

SHUT DOWN THE BLOCK 4 STREETS AND PUT SCREENS SO THEY CAN HAVE A PARTY OUTSIDE. @kanyewest the ? pic.twitter.com/scOfRht9V6

But sadly, Kanye didn’t have enough magic to shut down the streets of New York. In fact, the concert had to be canceled completely due to “safety concerns.” Obviously the crowd of nearly 4,000 people were disappointed, but they did briefly see their hero.

He drove through the crowds and poked his head out of the sunroof. You can check out a short clip of that by clicking on this link. Or check out the video below.

At the end of the night (or morning) Kanye’s wife Kim Kardashian posted on her Snapchat. She told fans of her husband that he tried so hard to make it happen, “Alright guys, we’re in bed. We tried… he tried so hard, but it was just bigger, the cops just really wouldn’t allow it.”

You know, sometimes it’s about the experience and not the result. Those people on the streets might have been disappointed for a moment, but they’ll look back this event and realize they were part of something special.