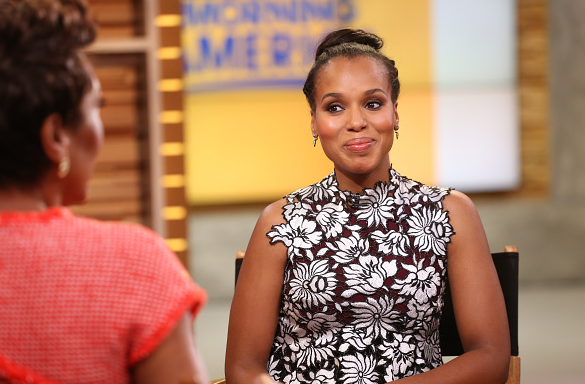 Kerry Washington might be one of the hottest names in Hollywood right now. The 39-year-old actress has been incredible in her role on ABC’s hit show, Scandal. And some people might think it’s been an easy climb up the television ladder for Washington, but those people are wrong.

She sat down with actor/comedian Aziz Ansari for a Variety Studio: Actors on Actors segment, which is scheduled to be released in full later this month, and during the interview Washington revealed she has been fired at least twice for not being “hood” enough.

Before Scandal, I was actually cast in two other pilots. Both went to series, but I was fired and recast. For both, it was because they wanted me to sound more ‘girlfriend,’ more like ‘hood,’ more ‘urban.’

And if you think this a rare situation…it’s not. Minority actors face a lot of the same struggles. Aziz Ansari backed up Kerry’s statement by sharing his own story.

A lot of other minority actors have told me, ‘Oh, this so rings a bell’ when you go into an audition room and you see a bunch of people that look like you and you just start feeling like, ‘Oh, I’m not here [for me], I’m here because I fit what looks like the person they want in here.

Fortunately for Aziz and Kerry, they are huge stars and they’re able to create their own projects now. As most of you know, Aziz produces and stars in his own show (Master of None) on Netflix. It was one of the top rated shows this past year. And he’s making sure he doesn’t make the same mistakes. He’s letting the actors bring out the characters.

I feel like a lot of times people don’t do that and then you end up with other people’s perception of what certain people are like, and it’s insulting to actors.