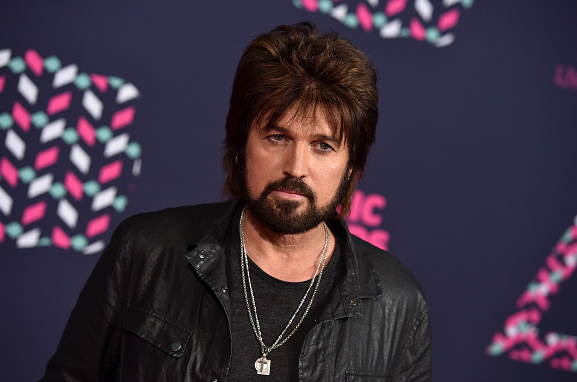 What The Heck? Billy Ray Cyrus Debuts New Haircut, And It’s So Much Worse Than A Mullet! (DEADLY PHOTOS) When Billy Ray Cyrus released a song in 2006 about wanting his mullet back, there weren’t a lot of people going, “Totally, bro. We all want the mullet back!”

And apparently Billy got pretty upset with the world for not having his back, so he decided to find the one hairstyle that is worse than the mullet. This hairstyle, that he featured last night at the CMT Awards, is so bizarre that it doesn’t have a name. It’s like Joe Dirt mixed with every serial killer in history. The longer I stare at it, the more uncomfortable I get. I feel like it’s going to jump off his head and attack me. That hair could have its own horror film. People just randomly waking up and the hair is calmly sitting on the edge of their bed. Can you imagine how frightening that would be?

It wouldn’t have to murder you. You’d kill yourself.

THESE PEOPLE ARE TOO CLOSE! WHAT ARE THEY THINKING? THAT ONE DUDE MIGHT EVEN BE TOUCHING IT! CAN SOMEONE CHECK ON HIM TO MAKE SURE HE’S STILL ALIVE THIS MORNING? I guess the only good news is that this hairstyle might be for his new comedy show on CMT titled Still the King. It’s scheduled to premiere this Sunday and is reportedly about a character named ‘Burnin’ Vernon Brown, who is a washed-up country singer turned Elvis impersonator.

That might explain the look. But still, they should have already filmed all the episodes by now. Why is he still rocking the look? To promote the show? If that’s the case, you failed. I can’t watch 30 minutes of that hair. I can hardly look at it while it’s stationary.

Seeing that thing in action? Uh, no.