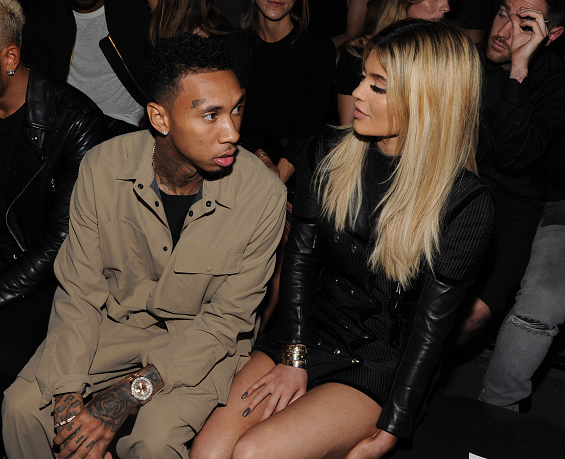 Damn. Things in Hollywood move fast, eh? Last week, it looked like Kylie Jenner and PartyNextDoor were getting pretty serious. We all thought the 18-year-old reality star had officially moved on from Tyga, especially when she was seen making out with Mr. Door in his new music video.

But it looks like Kylie has decided to give Tyga another chance. She posted a trio of photos showing her getting real comfortable with Tyga inside a photo booth. The pictures were reportedly snapped on Monday night during Khloe Kardashian’s birthday celebration at Dave & Buster’s, because even the Kardashians like to feel normal sometimes. Sources say they were with each other the whole weekend, “They are officially back together and he is staying there with her. It’s up in the air if he is going to live there permanently or is just staying there for now.”

That sounds like a wonderful idea. He should definitely move in with her. That will fix their relationship. Maybe they could add a baby too. It will only make their love stronger. THAT’S HOW IT WORKS, RIGHT?

Back on Friday, Tyga posted a photo of Kylie sitting on a bed wearing a dress, he captioned the photo, “They always come back…” he quickly deleted the photo though. Most likely because he knew it made him sound like a giant douchebag. Good for them. I mean, they’ll probably hate each other next week, but still…good for them. This is clearly love. <3