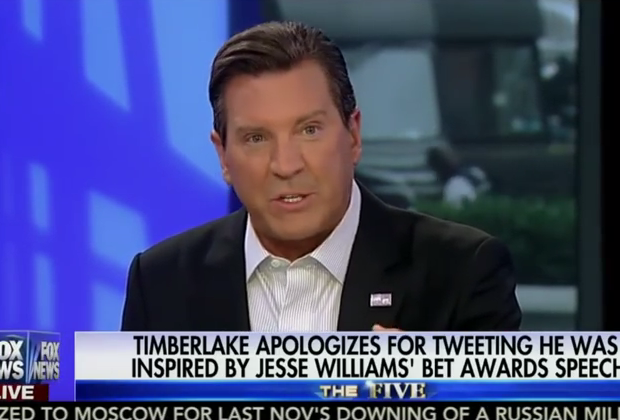 So Fox News Watched Jesse Williams’ BET Speech, And The Discussion That Followed Is So White That It Hurts (VIDEO)

Breaking news: White people like rap music and rappers should be thanking the white community for buying their music and going to their concerts.

Seriously. That’s what Fox News host Eric Bolling thinks. During an embarrassing conversation about Jesse Williams‘ powerful speech at the BET Awards, Bolling seemed to suggest black entertainers owe most of their success to white people.

Ah, Eric…nice! I thought you’d go with Kanye or maybe even Drake, but you surprised everyone and went with Jay Z. I’m convinced those are the only three rappers most white people know.

The good news for Eric is that he was sitting at a table full of ignorant white people, so his comment was kinda like a piece of golden corn in a pile of sh-t. It stands out for a few seconds, but then you realize you’re staring at a piece of sh-t and move on with your life.

Another great line from their discussion comes from co-host Kimberly Guilfoyle, “He [Jesse] seems so upset, I don’t know, I mean I feel like, yeah, there’s things that go wrong, but also focus on the positive.”

Because that’s what your network does, right? They focus on the positive? They never spread lies or negativity, right? RIGHT? RIIIIIIGHT? RIIIIIIIIIIIIGGGGGGGGHHHHT?

Jon Stewart had it right…