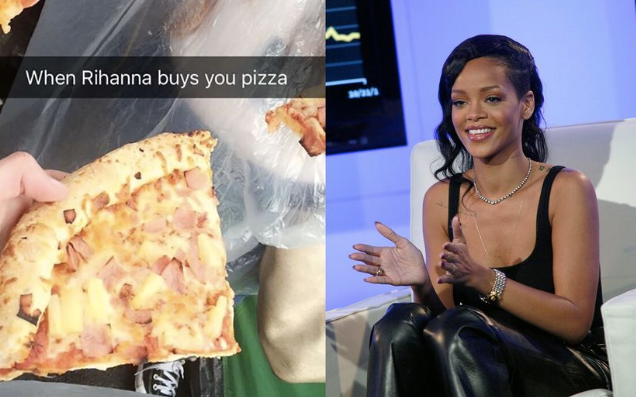 Rihanna Treats Her Loyal Fans Right, Sends Them Pizza After They Waited For Hours In The Rain To See Her Perform (PHOTOS) While Madonna continually shows up three hours late to her concerts, and then gets at mad at her fans for having the audacity to show up on time, Rihanna is giving her fans free food and signed pizza boxes.

On Wednesday, the 29-year-old singer felt bad that her fans in Manchester, England, were having to wait for hours in the rain. They were waiting in line to get inside the show, but it was apparently just pouring on them the entire time.

So Rihanna decided to surprise them with 20 boxes of pizza and some fresh towels to dry off with. This news was first reported by an unofficial Twitter account for her Anti World Tour.

And as mentioned above, she reached new levels of greatness by signing some of the pizza boxes and writing a special note.

We couldn’t believe it. The pizza was only sent to our side of the queue. It was sent with a message from Rihanna, apologizing for the weather.

If you need photo proof of this happening, check out the photo below. As you can see, that’s definitely a pizza and those pale hands prove this photo was snapped in England. Pretty neat stuff. It seems like Rihanna has a great relationship with her fans, and no we’re not just saying that because she buys them pizza, but the pizza definitely doesn’t hurt.

Meanwhile, Drake over here like, “I see…everyone getting pizza except for me.”