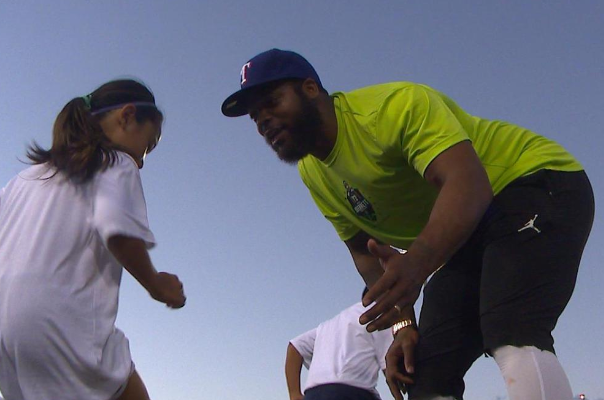 Seattle Seahawks’ Michael Bennett Calls Out Steph Curry (And Other Athletes) For Their Expensive Youth Camps: “How Much Money Do You Need?” Good guy/Seattle Seahawks Pro Bowl MVP Michael Bennett is one chill dude. He seems to really understand that we’re all here to help one another. To hopefully one day end the struggle and make sure everyone has a good life.

The 7-year NFL veteran has had a lot of success in the league, but we have to imagine his friends and family are more impressed by his work in the community. He grew up in Houston; however, he’s spent the last four years living on the island of Oahu.

As Khon 2 reports, he spends most of his time helping out in the community and giving back…

That comes from my mom and dad growing up in the community and always giving back. My dad was a part of the school board, my mom worked in the district for 20 years, and I just always wanted to give back and always make it free.

That last word being the most important for Bennett. He’s been hosting a free camp for the past four years on the island, and it makes him sick when he sees these rich athletes charging kids insane amounts of money to attend their camps.

He specifically called out Steph Curry, who hosted a four-day camp on the campus of BYU-Hawaii. He charged each kid $2,250 to attend, which Bennett finds absolutely ridiculous.

I see a lot of different athletes come through Hawaii whether it’s Steph Curry or whoever it is. They all come here and it makes me mad, because I live in this community and I understand this community — that there’s so many kids who can’t afford to pay such a high amount of money. In my mind it’s like, how much money do you need before you start giving back for free?

In Curry’s defense, his camp is a four-day event. Bennett’s camp requires no overnight stay, which means he doesn’t have to pay for their meals or lodging. But still, Curry makes over $12 million a year (just from his contract alone) so we’re pretty sure he could afford to hold a free camp two or three times a year.

Let’s remember, it’s not just pro athletes being greedy. Actors and musicians take money from their fans all the time by charging (in some cases) close to $1,000 just for a private photo at an event like Comic-Con.

And while we’re calling people out for being selfish, let’s look at ourselves. I’m not rich. I’m not even poor rich. I’m just poor. But still, I could afford to donate more to local shelters. Or heck, anyone can donate time. You don’t have to buy anything at all.

So just remember that while it’s true most of these rich celebrities are greedy, self-absorbed buttholes, we all could be doing more to help out.