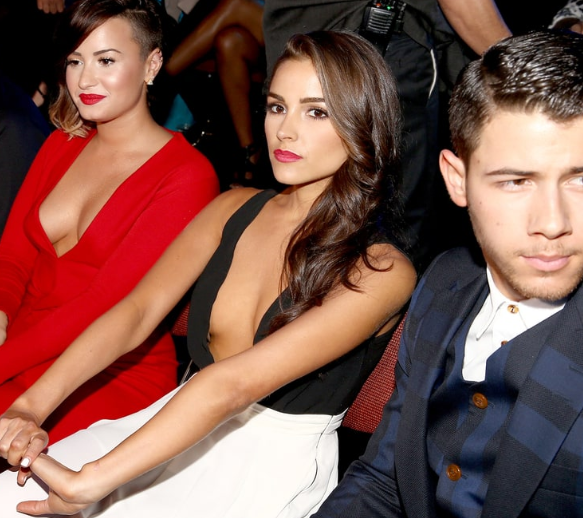 Nick Jonas and Demi Lovato claim they have never had a romantic relationship. They have always been strictly best friends since they filmed Camp Rock together back in 2008. For almost 10 years now the two stars have always been there for each other when they needed a shoulder to cry on.

During a recent joint cover story for Billboard magazine, Jonas revealed that Lovato is the third person he calls when some serious sh-t goes down. He calls his dad first, then his brother Joe, and then Demi. He admitted he likes going to her for advice because she doesn’t hold back. She’ll always say what’s on her mind, and she certainly did that when it came down to Nick’s relationship with beauty queen Olivia Culpo.

Jonas talked about his breakup during the interview, and he remembered Lovato telling him to be free…

I internalize things, so we have this rule that we never want to hear about it in a tweet or something. She’d read me the riot act, so she’s the third person I call — my dad, Joe, then Demi. She was like, ‘Just go, create and be free.’ She also said some other things.

What were those other things? Well, Demi wasn’t afraid to talk about those other things during the interview. She made it clear that she never liked Culpo, and even though she didn’t exactly call her boring, we get the feeling that’s where she was going with it.

I go, ‘Honestly, I didn’t like her anyway.’ It’s not because she’s mean or anything, but he has such a great sense of humor and I want him to be with someone that makes him laugh. I can tell if something’s up because he’ll close off. He’s a guy in his twenties and he’s famous and he likes to have a lot of fun.

It looks like Nick took her advice because he’s been having a lot of “fun” recently with multiple girls. He’s even testing out the older ladies with his strange Kate Hudson fling. The two stars never confirmed they were banging, but they never denied it either.

And for all you fans out there hoping Nick and Demi will fall in love one day, it doesn’t look like that’s ever going to happen. There’s too much history there, especially when you remember the fact that Demi and Joe had a thing at one point.

Well, for a couple of years there was the Joe and Demi romantic thing, so I’d be this emotional bridge for them. But she and I were productive — we’d write songs about it. We became even closer because it was never going to be [romantic].

Yeah, yeah…that’s what they all say before love smacks them in the face.