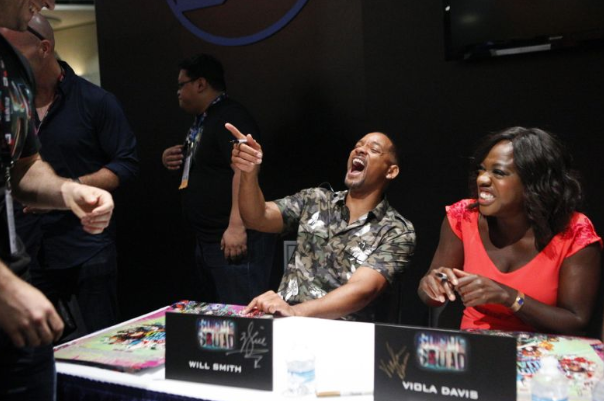 WATCH: Henry Cavill Proves Will Smith Is The Best Person To Prank In Hilarious Comic-Con 2016 Video! A few months back, I remember watching some YouTube video explaining how Will Smith is so comfortable in social settings. They pointed out how strong his voice is when he tells a story, so people have no problem paying attention to him, but more important the video pointed out how supportive Smith is. He’s a great listener and even if your story sucks, he’ll laugh at it and make everyone else laugh. This heightens the conversation and puts everyone at ease. It also allows him to secretly be in control.

So when Superman (Henry Cavill) got the idea to prank a celebrity during Comic-Con in San Diego, he knew Smith would probably give him the best reaction. The 33-year-old actor put on a Guy Fawkes V for Vendetta mask and walked around the convention for a bit.

No one really recognized him. Not even Will Smith. Cavill walked up to Smith and asked him for a photo. As the photo was being snapped, Cavill took off his mask and revealed himself to Smith.

You have to check out his reaction…

It’s all about that reaction. You can’t have a great prank without a great reaction. I have a feeling Smith would have reacted the same way had Cavill walked up to him and simply said, “Pull my finger.”

We should all be more like Smith. I’m going to start practicing my fake laugh today.