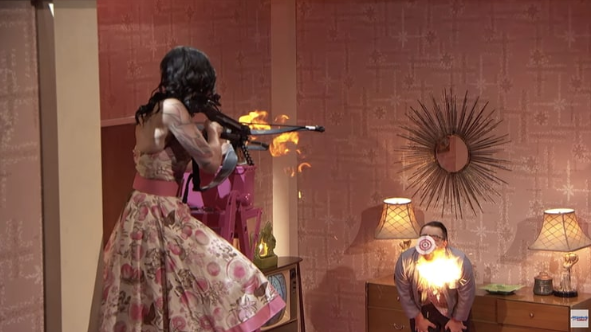 WATCH: America’s Got Talent Contestant Gets Shot With A Flaming Arrow On Live Television, Update On His Condition And The Crazy Clip Inside!

If you’ve watched any talent show on television before, then you know the one thing every single act needs is fire. It’s their favorite thing. Singers get fire, magicians, daredevils, dog acts, comedians, etc. They all need fire to add a little energy to their act.

And on Tuesday night’s episode of America’s Got Talent, comedy daredevil team Ryan Stock and AmberLynn Walker walked on the stage to impress the judges and the audience at home. At the end of their act, Stock swallowed the base of a lamp (because why not?) and held it inside his mouth while his fiancee aimed a flaming arrow at the target on the bottom of the lamp.

The arrow missed the target completely and hit Stock right in the neck. You can see when the impact happened, it almost looked as if Stock was choking on the lamp, which made everyone in the crowd nervous. Thankfully, he was able to dump it out of his mouth and he started fanning his neck…making sure the flame had gone out.

This was the reaction from the judges…

Believe it or not, Stock remained on stage to hear what the judges had to say about the performance, but then Simon Cowell was like, “What the bloody hell are we doing here. Let’s get this guy some help,” so Stock left the stage to get some TLC from the doctors backstage.

He is doing fine now, by the way. He reportedly has a bruise on his neck, but it could have been a lot worse.

I’m sure this will just make more people vote for them. America won’t be happy until Stock’s heart stops beating on the stage. We’re all sick freaks who can’t wait to use the hashtag #AGTDEATH #HOWIEMANDOWN