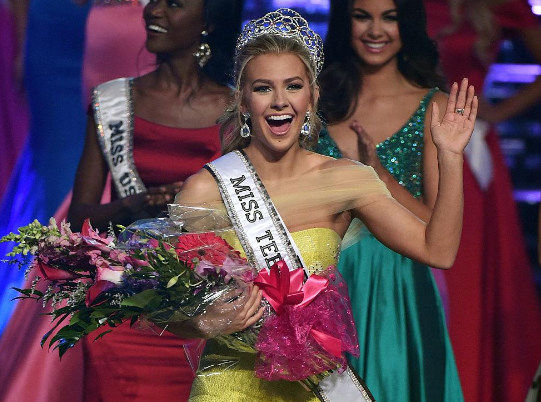 Just minutes after Karlie Hay won the annual Miss Teen USA competition on Saturday, tweets dating back to 2013 revealed Hay had posted some racist comments on her social media accounts. She used the N-word multiple times, and reportedly even threatened people on her Twitter account.

Hay issued a public apology after the tweets were released, and The Miss Universe Organization issued a statement, informing everyone that while they certainly don’t approve of the language she used in the past, they believe she is a different person now, “As Karlie stated, she was in a different place in her life and made a serious mistake she regrets and for which she sincerely apologizes.”

The now 18-year-old Texan pageant queen was just 15-years-old when she posted the controversial tweets, but that’s still no excuse. In her first TV appearance since the scandal exploded, she told Good Morning America that she has grown since then and is embarrassed by her actions.

I am very sorry. It’s embarrassing. It’s something I’m ashamed of. I’ve grown up from that 15-year-old girl who used that type of language. It’s never acceptable and now I know how hurtful it is, and it hurts me to know that at one point in my life, I used that language. I said that. It’s not me.

And that’s why she’s not giving up her crown. She doesn’t believe she should be punished for something she said when she was 15-years-old.

I’ve grown from then and I’ve blossomed into the person I am today. I think that I can turn this message into a positive message because there are people that use that word and it’s not acceptable ever.

You can take a look at some of the deleted tweets below. What do you think? Does she deserve to keep the crown?