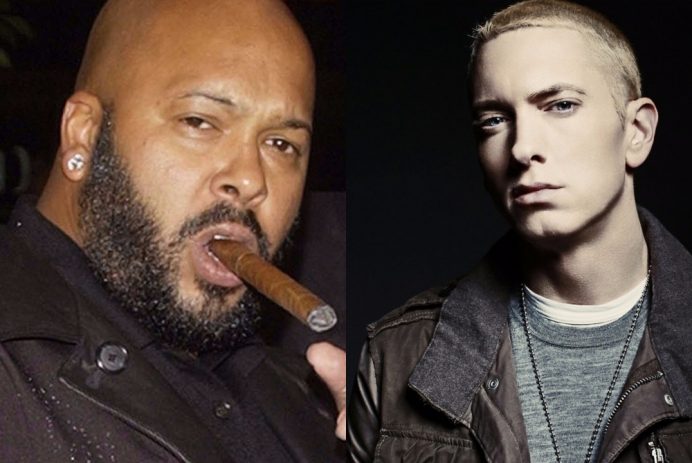 Bodyguards are typically closer to celebrities they are protecting then their best friends.   They are around the celebrity they are protecting everyday, all day.  When that celebrity doesn’t want to be bothered by anyone and wants some alone time, that typically just means the bodyguard is walking behind them instead of beside them.  This is also why, they typically know most dirt on that celeb.  In most cases bodyguards do not reveal any secrets because as a career bodyguard you will not be able to find work after that.

However this is different.  Eminem’s bodyguard is speaking out, not on things that Eminem did, but situations that they were in.  In this instance, Byron “Big Naz” Williams should be more concerned with Suge Knight then Eminem.  With Suge locked up, going blind and in bad health, Big Naz figured it would be a great time to write a book.

I assure you, Big Naz won’t be winning a Pulitzer for this masterpiece, however in an interview about the book, he did reveal that Eminem almost got killed by Suge Knight.  Not once, but twice!

The first time it happened at the Source awards.  He explained that during the award show itself, they let artist sit among other artists with the bodyguards in the back This would artists to easily mingle with one another and since they are all celebrities, it would be safe.

During the “minglation” time, Big Naz noticed that Eminem’s face was truing red and he was surrounded by Red shirts.  Big Naz saw from a far that there were some issues going on and took control.  He explained,

“There was a situation at the Source Awards, which was our first encounter with Suge Knight and his henchmen. They had it to where the artists couldn’t sit with the bodyguards. I notice Em is in the aisle and he is beefing with all these guys in red shirts. This is what they said: ‘Death Row motherf***ers! Suge Knight sent us to strong arm Eminem and it’s going down!’ I had to snatch Em up and call Dre, because he was backstage.”

He all recounted a time In Hawaii.  It was supposed to be relaxing, however no relaxing was going on there.

“The scariest moment is when we went to Hawaii. When the plane lands we are greeted by 20 Honolulu police officers and they told us that Death Row is here — they tried to hem [Snoop Dogg] up. Suge Knight had sent 50 guys to try to break up the show. When we got there, vacation mode was over, we were lockin’-n-loading, putting on bullet proof vests with their wives and girlfriends sitting next to them. We had to have Interscope pick up the tab to put Honolulu police with each bodyguard, because of how deep Suge was over there.”

Listen to Big Naz tell how it all went down.  I wonder if Eminem even knows how lucky he is to be alive!! I guess he knows now.