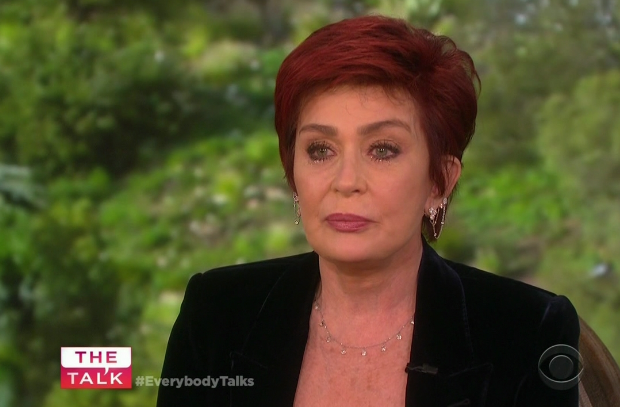 After being married for over 30 years, Sharon and Ozzy Osbourne shocked everyone earlier this year when they announced they were splitting. Sharon reportedly ended things when she discovered Ozzy had been having a 4-year-long affair with his former hair colorist.

But just a few days ago we learned both Ozzy and Sharon are still fighting for their marriage. They are trying their best to make things work, and the first step to making their marriage work is admitting that Ozzy has a problem. He has reportedly been going to therapy sessions for sex addiction for the last three months.

Sharon confirmed this news on Wednesday’s episode of The Talk. A teary-eyed Sharon told the audience, “He’s [been] going to outpatient for sex addiction for the last 3 months and after the Black Sabbath tour, he goes into inpatient for 3 months. He’s working at it.”

The 63-year-old reality star/television host admits the situation has been incredibly hard for the entire family. They’re all embarrassed, because they believe a sex addiction isn’t treated with the same respect as drugs, alcohol…or even a food addiction.

Drugs and drinking is more acceptable, but when it’s somebody who has a sex addiction, it’s more embarrassing. I am proud [Ozzy] has come out and admitted it finally. It’s very very hard. Every person who comes in the room thinks, ‘Oh, don’t come in, he’s here.’ He should call Tiger Woods for some advice.

Of course, her co-hosts on the show had her back and assured her that she had nothing to be embarrassed about, which is 100% true. It’s not like she did anything to cause this, and honestly she’s more like Ozzy’s caretaker at this point. She’s probably just sticking around to make sure he doesn’t choke to death while drinking a glass of water.

We wish them all the best!

Side note: on a scale from Kim Kardashian’s face to the cheese they put inside Hot Pockets…how f–king fake is everyone (including the audience) on The Talk?