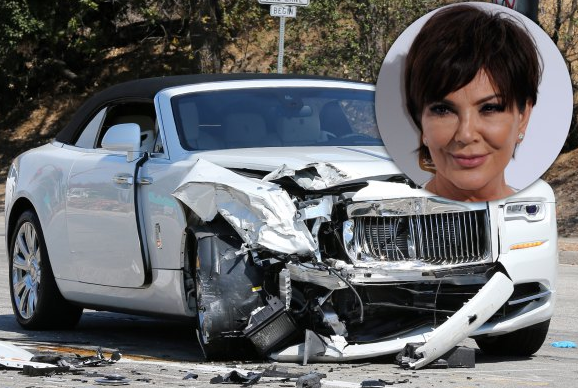 Kris Jenner Is In Pain After Being Involved In A Scary Car Crash In California Yesterday, We Got The Accident Photos And Update On Her Condition!

Hump day was not a good day for Kris Jenner. She was driving her fancy Rolls-Royce (which was only a week old) on a side street when a Prius ran a red light and crashed into her vehicle as they were trying to cut her off.

And as you can see from the photos, this was not your typical fender bender. Both cars suffered some legit damage, and the impact was intense enough to activate the airbags inside Jenner’s car. Her front end is pretty much destroyed, but obviously that’s not a huge deal for someone like Kris. In fact, she’ll probably just buy a brand new car.

The most important thing is her health. She was treated by paramedics inside her car. The 60-year-old reality star reportedly didn’t want to be removed from her vehicle because she believed it might make her injury worse.

Although, we think it’s more likely she just didn’t want the paparazzi snapping thousands of photos. TMZ first reported this accident, and their initial report speculated that Kris might have suffered a broken wrist during the crash. However, it doesn’t look like that’s the case. She might have escaped without any broken bones.

She told E! News that she is still “shook up” from the accident, but she didn’t have to enter the hospital or anything like that. She also said that her hand is the only thing causing her real pain at the moment. Also, no other members of the family were inside the car with her.

And that’s a good thing, because when multiple Kardashians experience a slightly traumatic event together, well…it ends up looking something like this.