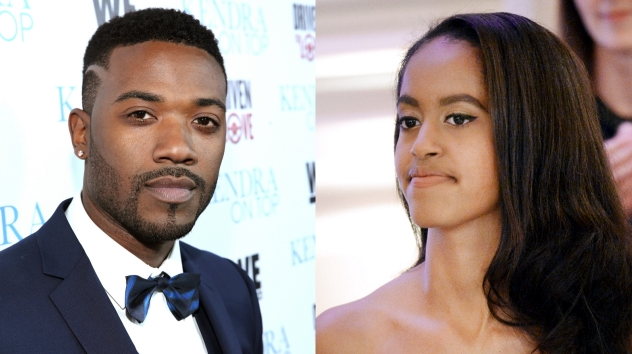 Did Ray J Really Try To Slip Inside Malia Obama’s DMs? Find Out What He Had To Say About The Bizarre Rumors (VIDEO)

A few gossip blogs reported earlier this week that the 35-year-old singer/reality star was trying to discreetly slip inside Malia Obama’s DMs. They claimed he had been messaging Malia all weekend long in an attempt to hook up.

Trying to arrange a bootycall with the president’s 18-year-old daughter sounds like a terrible idea for anyone, but it especially sounds bad for Ray J because he’s scheduled to get married this weekend. He will be marrying Princess Love this Friday and it truly looks like they are happy and in love, so these rumors didn’t make any sense.

According to the report, when Barack Obama found out about these secret messages, he allegedly told the hip-hop star, “One phone call and you’re done like your career, don’t forget I’m from Chicago. I’ll take you outside and f–k you in the street.”

As much as we’d love to believe Obama called Ray J and threatened to rape him in the middle of a street, we’re all adults here and we realize that didn’t happen. Like at all. In a world full of things that didn’t happen, that phone call didn’t happen the most.

You know what else didn’t happen? The mystery DMs. This story was bullsh-t from the beginning, and sadly Ray J was forced to talk about the silly rumors on his Instagram account, “Why y’all always trying to bring me down? I’m positive; I’m gettin’ married on Friday; like, what the hell would I be doin doin’ anything like that?” he says in the video posted below.

Leave the man alone. He ain’t about the drama anymore. Also, do y’all really think Malia would have replied to Ray J? She’s the freaking president’s daughter. No disrespect to Ray J, but she at least deserves someone who has had a song played on the radio in the past five years.