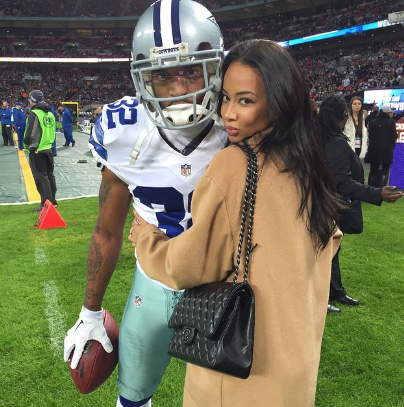 Dallas Cowboys cornerback Orlando Scandrick just dropped a lot of cash on a five bedroom mansion in the private gated neighborhood of Tarzana, which is located in the San Fernando Valley region of Los Angeles. He made the move to support his growing family.

He and his longtime girlfriend Draya Michele had a baby boy together back in April. Scandrick already had two daughters from a previous relationship and Michele already had a son. In total, they have four kids to take care of, which means they need a $2.8 million mansion. It’s the only way they’ll survive.

We all know a family with four kids needs 6,300 square feet, 7 bathrooms, a lighted basketball court, saltwater pool with a water slide and a built-in barbecue. Those features are all essential. You can’t raise happy and healthy kids without ’em.

The NFL star is still trying to sell his other home in the area, which is on the market for a cool $1.795 million. You can click here to check out more information on his old house. And if you’re super rich, maybe you’ll consider purchasing it.

Scandrick just recently signed a one-year extension worth almost $10 million with the Cowboys, so it’s not like he can’t afford this new place.

Check out the photos below! And spend the rest of your day at work dreaming about how different your life would be if you were talented enough to play professional ball.