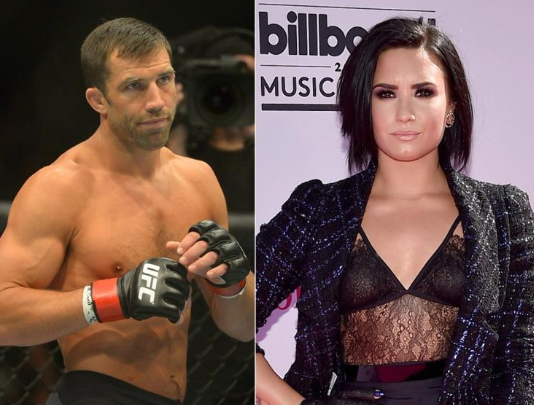 We can honestly say we didn’t see this relationship coming. As most of you know, Demi Lovato and Wilmer Valderrama ended their relationship earlier this year after being together for six years. That’s right, folks. Six years! And Demi is just 24-years-old, so she had been with Wilmer since she was 18.

But now she’s back on the market, and it looks like she has found her type. Last month, she reportedly had a fling with MMA fighter Guilherme ‘Bomba’ Vasconcelos. That didn’t last long though.

Most likely because Lovato knew she could pull a fighter with a bit more clout. A fighter like 31-year-old Luke Rockhold, who shocked the world back in December after knocking out UFC superstar Chris Weidman in the 4th round of their championship match.

According to TMZ, Lovato has been training hardcore at Unbreakable gym in Los Angeles, which is where she met Luke for the first time earlier this year. They “clicked right away” and have been sending each other secret messages on their Instagram accounts.

Three weeks ago, Luke posted a shot of a smiley face on his pinky finger, and Demi did the same thing just a few days later on her own account… They’re in pinky love. Demi has said before that she loves older guys, so at least she’s continuing the trend.

By the way, we could see Demi step inside the octagon soon. As we mentioned above she’s been training a lot recently. Don’t believe us? Check out the fighting clips below. She’s got some power behind those punches.