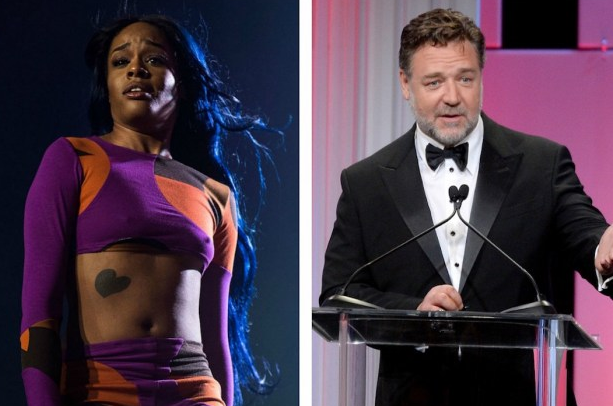 Well the scuffle between Russell Crowe and Azealia Banks just got a lot more interesting. If you read our post from yesterday, then you’ll know there is some confusion going around. Crowe, and most everyone else at the party, claim Banks lost her damn mind during dinner after another guest told her to shut up.

She allegedly threatened to stab Crowe and a few other guests with a broken glass and watch as “blood would squirt everywhere like some real Tarantino sh-t.”

Which sounds exactly like something Banks would do if someone (especially someone she didn’t know) told her to shut up.

But Banks claims everyone is setting her up and the truth will come out.

Now her extreme denial is interesting because typically Banks embraces her crazy behavior and doesn’t back down, so it makes you wonder if she might be telling the truth.

And according to TMZ, the truth will come out because the hotel has security cameras in the hallway where Crowe and Banks had their altercation. It won’t show what exactly started the fight, but it will give us a hint at who is telling the truth.

Police will be investigating the footage from the cameras. Banks filed the battery report, so she better be telling the truth. Without her filing the report, police probably would have never requested the footage.

TMZ also claims police are trying to set up an interview with both Banks and Crowe. We will continued to keep you posted. Let’s all say a prayer to the Gods above that someone releases the footage. Curing cancer can wait.