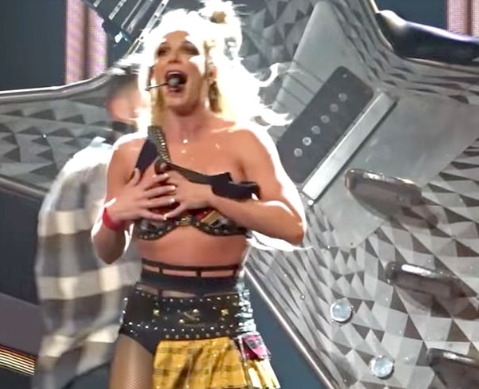 Britney Spears Nearly Loses Her Top During Concert, Watch How Her And Her Backup Dancers Handle The Situation (VIDEO)

Britney Spears has been having a bit of trouble with her outfits on stage lately. For the second time this week, the singer has experienced a wardrobe malfunction while performing her show in Las Vegas.

This latest incident nearly disrupted the entire performance. You can see her in the video above performing a mix of I Love Rock N’ Roll and Gimme More. The trouble started during her cover of I Love Rock N’ Roll. Her black bra top unfastened while she was dancing and the audience nearly got to see two things you typically have to pay extra for in Vegas.

The 34-year-old entertainer got some help from her backup dancers, but their quick fix only lasted a minute or two. By the time she moved on to Gimme More, her top came off again and there was no fixing it.

A quick-thinking backup dancer took off his shirt and gave it to Spears. She quickly put it on and finished the performance like a true professional. I mean, sure it would have been more difficult for her had she actually been singing, but there is still a lot happening on that stage. It looks easier than it is.

As mentioned above, this isn’t her first wardrobe malfunction. One week ago, Spears was performing her routine of 3 in a sheer bodysuit when it began to unzip. Several dancers tried to fix it, but they couldn’t pull it back up. Spears continued the performance even though her entire back was exposed.