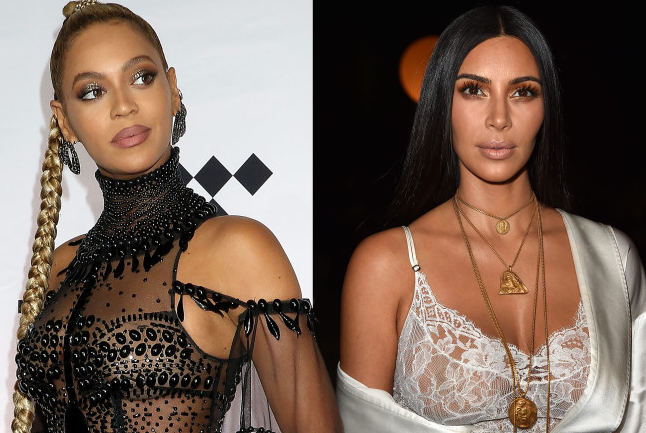 Is This Why Blue Ivy And North Have Never Had A Play Date? Report Claims Beyonce Has Never “Genuinely Liked” Kim Kardashian! Remember when Kanye West went on a rant about Jay Z at one of his concerts and said, “Our kids ain’t never even played together!”

Well, I guess now we know why. Multiple sources claim Beyonce has never truly liked Kim Kardashian. She doesn’t mind Kanye (or better, she can tolerate him) but she does not like Kim or anything she stands for.

On the rare occasion they all hang out together, Beyonce is always a little cold to Kim.

“She’s mostly tolerated her because of their husbands’ friendship and [their] mutual friends, like Jennifer Lopez. She is always a little icy to Kim. The last time they hung out, the minute Beyoncé could leave the conversation, she did. They always have lots of awkward pauses.”

And it makes sense. They really don’t have anything in common. I mean, they’re both mothers and they’re both married to famous rappers, but that’s about it.

Heck, Jay and Bey didn’t even show up at Kim and Kanye’s wedding. They were invited. Their names were even engraved in the marble table at the wedding dinner. And it wasn’t like they had a family emergency that prevented them from attending. They were just chillin’ in the Hamptons.

“[She] always gives Kanye a lot of grief whenever he’s done anything for the show.”

We must remind you that you can’t (and shouldn’t) believe every single thing a “source” says. However, there is usually a bit of truth to their statements. It’s not hard to imagine Beyonce disliking Kim.

Is that why their kids haven’t played together? Possibly. Maybe Beyonce doesn’t trust Kim. Or maybe Bey and Jay are just really protective of their kid.

Either way, expect to hear more rants from Kanye.