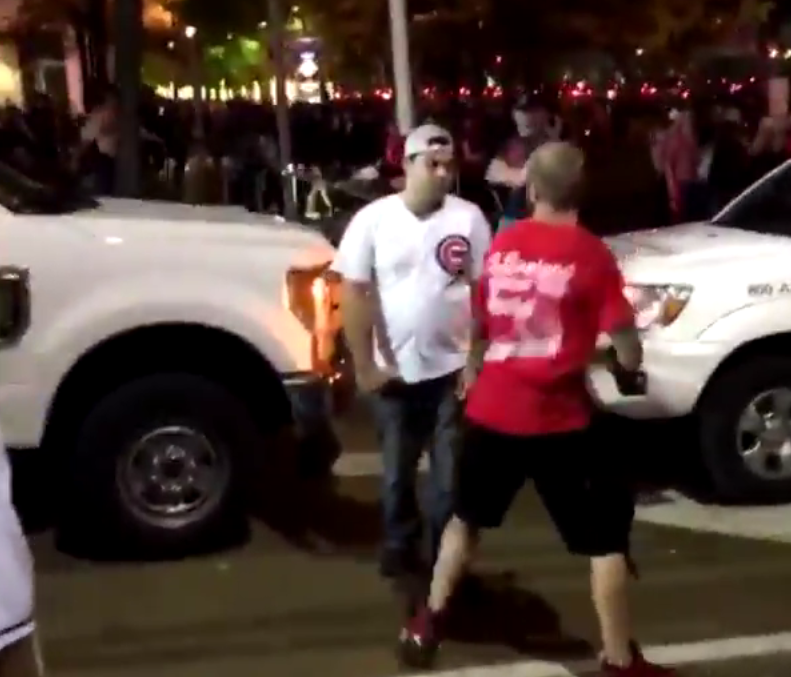 INSANE VIDEO: Chicago Cubs Fan Gets KNOCKED OUT With Just One Punch After Argument With An Indians Fan (VIDEO)

Baseball is back, folks. It was once America’s favorite sport, but in the last 10-15 years, football has slowly started to take over. And while the NFL is still king right now, the MLB is trying to make its way back to the top spot.

And the incredible World Series between the Chicago Cubs and Cleveland Indians will certainly help build a bigger audience. There was already a lot of drama surrounding this series because of the ~curse~ that has plagued the Cubs for decades.

It looked like the Cubs were going to fail again this year. They were down 3-1 in the series, and the Indians had home field advantage, thanks to MLB’s silly decision to make the All-Star game matter.

But the Cubs battled back and forced a game 7. The most stressful game a professional baseball player will ever play. And to make it even more stressful, they decided to go into extra innings. It was almost as if the MLB hired someone to write a screenplay for real life.

The Cubs won 8-7 in 10 innings and grabbed their first World Series title in over 100 years. Fans of the team were obviously celebrating all night, but one fan’s night ended early when he was knocked the freak out by an angry Indians fan.

Chris Vallimont is the dude who shot the video you see below. He told TMZ that the Cubs fan dared the Indians fan to hit him.

“Hit me now, I dare you,” he yelled. And unfortunately the other guy accepted his dare. He knocked his ass out with just one punch. Witnesses claim the dude didn’t move for 10-12 minutes. Paramedics rushed to the scene and transported the poor guy to the hospital. He’s going to make a full recovery.

In fact, he talked with TMZ and sent out this statement:

“My head hurts. I survived an assault just like my Cubs survived being down 3-1. Go Cubs go!”