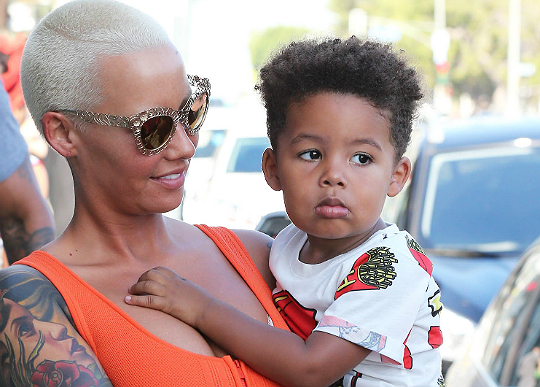 WWYD If She was Your Baby’s Mamma? Amber Rose Causes A Huge Backlash On Social Media After She Posted a Video of Her & Her 3 year old SON Sebastian Getting a Mani & Pedi. You can only imagine the fury that followed after Amber posted this her video on her Instagram page.

Rose has 12.8 million followers and the video has over 600K views and over 3000 comments in just hours after it was posted.

In the video you can hear Amber asking her son what color he wanted,

AMBER:  Hey, pumpkin, are you excited to get a pedicure and manicure?  It’s gonna be so cool.  What color are you going to get?

Amber is no dummy.  She has been around the block so she knew that this post was going to get quite the reaction.  If you ever looked at her Instagram bio it says, “F**k your opinion, I do what I want”.  This is definitely the truth.

As if baiting the public on purpose, she captioned the video saying:

Pumpkin nails with Mr Skully Bones ? #HalloweenisNeverOveratOurHouse We encourage our children to paint, draw and be creative so why block them from their creativity when it comes to self expression?

The reaction on social media was swift from both sides….but before we get into that, watch the video.  Sebastian is adorable as hell.

Trolling is what I do and people are funny as hell.  While the votes are being counted for our new President, I’m trolling comments to entertain my readers.  Here are some of the responses to the post:

jy_xoxoYa I’m all for children expressing themselves but in this case you are encouraging him painting his nails which might ultimately confuse the child. It’s another thing if the kid said “mom I must paint my nails because I wanna express myself” then ya I would get it. But you done sat the kid down and encouraged him to paint his nails. Not like I give a sh*t at the end of the day but thought I’d kill time by commenting.

mz_prettyfulHe is innocent and people forget they are talking about an innocent soul who has not yet been exposed to making a difference. I commend u Amber for letting him be his free innocent spirit

lpressley75Omg! Thats what wrong with the males today. My cousin did the samething, and now her son is gay, and she regrets it. Boys needs to boys, and girls needs to sit like a lady. Now, if you’re teaching your son about taking care of his feet, his mind and body, and soul–then ok. As a nurse, I do tell all the males to take care of there feet and their skin. Yes, I have seen thousands of males and women’s feet that are unkept. And since your son like science, then the importance of foot care is a great start for a healthy living.

tooturnttovarGender roles aren’t valid, they are just created by us dumb ass humans to try and suppress women in all honesty. Fuck gender roles. It’s ducking paint on nails, it’s fucking expressive. Bitches talking about a man needs to knock sense into a woman? Are you serious? Get it together y’all, it’s not 1920.

bama_girl_duhhLol mommies gay best friend, we shape our kids the way we choose if we want our sons and daughters to be girly girls then that’s how we raise them, if we want tom boys then that’s how we raise them, that’s bonding time with a Lil girl, a big boy bonding time would be the baseball range or painting, but that’s just my opinion, she doing something right tho because he’s very handsome, well spoken, and a sweet Lil boy! ?

onestar187I like her but I don’t like this. This is why children are growing up so confused because their parents let them do shit like this. We have young children born female/male saying they want to be the opposite sex before they even know what sexuality is because their parents are encouraging it. I believe in everyone being themselves but at least let them get old enough to find out who they are and who they wanna be first.

notsoezeThis is sickening. A complete contradiction to what she wrote on the post. Children don’t know gender roles or society’s views they know what they are taught. Terrible. Teach them right and wrong and let them grow into whatever they like. Don’t force feed it.

As far as I’m concerned there is no right or wrong answer…simply because he’s not my kid.  I don’t tell people how to spend their money or raise their children.  The only person that Amber has to answer to is Wiz.  …..I wonder what he has to say about this…..