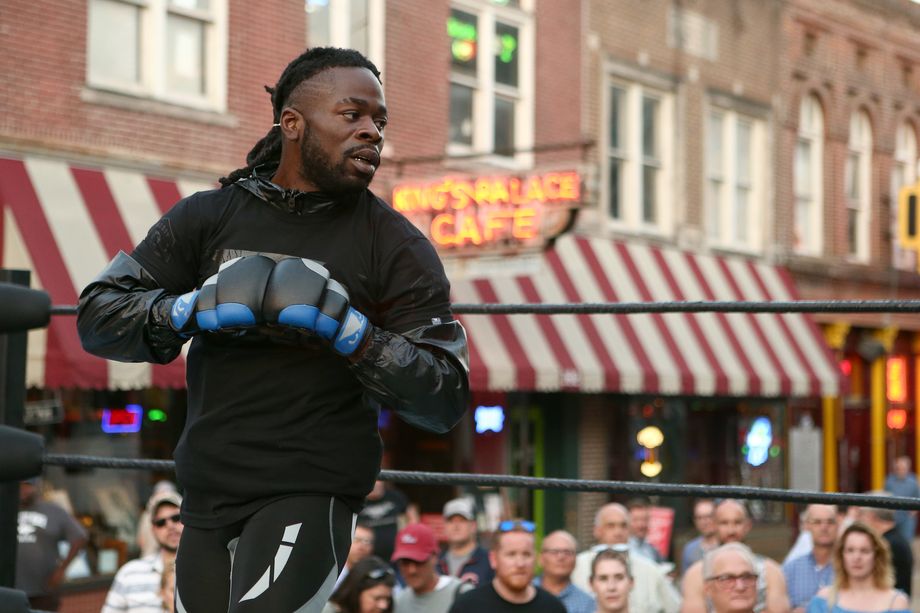 Baby Slice was supposed to make his pro debut in Bellator 160 and then again in Bellator 162.  In Bellator 160, Ferguson was injured during training and in 162 his opponent Ray Bing missed weight by 17 lbs! With each cancellation the anticipation to see Baby Slice carry on his father’s legacy grew exponentially.

Kevin Ferguson aka Baby Slice made all of us early believers after knocking his opponent out with a brutal blow 1:23 seconds into the first round of his first MMA fight.

Actually that fight is still on Youtube.  This is how he left his opponent. As you can imagine expectations were high after watching that fight and then after Kimbo Slice Sr.  passed away, it was up to Kevin to fight for the honor of the “Slice” name.  (Sounds like a story line out of a martial arts movie!)

PRE-FIGHT INTERVIEW WITH TMZ HAD US ALL CONVINCED

TMZ interviewed Baby Slice and he said that he couldn’t be hurt by punches because he went toe to toe with his dad.  Kevin is fighting at 165 lbs, Kimbo was 245, so that was easy to believe.

As mentioned in the title, Baby Slice went to work.  Besides his solid striking, he actually had pretty impressive take downs, something that his Dad never did.  It looked like a matter of time before Hamilton would be toast.  He even got hit with an illegal knee to the head by Baby Slice.  A point should have been deducted but wasn’t and Hamilton was forced to continue to fight.

Then in the 2nd round, when we were all but ready to stick a fork in Hamilton, in a matter of seconds, he had Ferguson choked out.  It was a crazy turn of events that just took seconds!

HERE IS THE FULL FIGHT (UPDATED)!