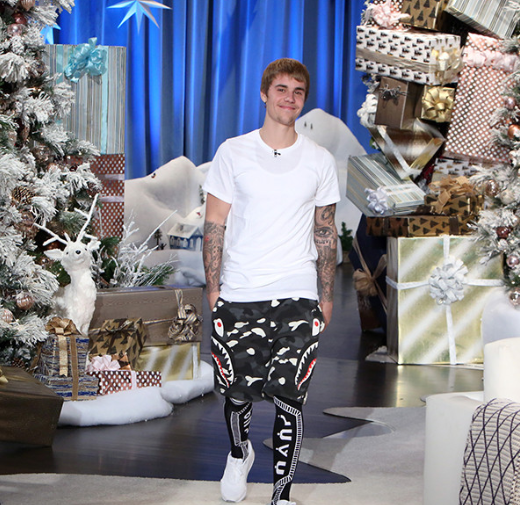 Justin Bieber Has A “Calming” Interview With Ellen, Talks About Being Single And Lonely On The Road…Plus Surprise Announcement! (VIDEO)

It’s been a minute since we have seen Justin Bieber on any talk show here in the states. The 22-year-old singer has been working hard on the European leg of his tour, which has been marred by multiple outbursts on stage.

He’s been trying to keep the screaming from his fans to a minimum while he’s talking on stage, but it hasn’t been working because 13-year-old girls in love don’t usually listen to anyone, even the person they’re in love with.

He recently tried to explain himself in a tweet:

“There’s going to be times where I say the wrong thing, because I’m human. But I don’t pretend to be perfect and I hope to God that, you know, I don’t say the right thing all the time because if that was the case then I’d be a robot, and I’m just, I’m not a robot.”

You hear that? He’s not a robot, and to prove this, the Biebs made a special appearance on The Ellen Show on Monday.

And since this is Ellen we’re talking about, Bieber’s dating life was one of the first things she asked about. He revealed that he was single and “Not really looking either.”

He admitted that it does get lonely while on tour:

But don’t feel too bad for him. He does have his dog, Esther, and his little brother will also visit him a few times on tour.

And he obviously doesn’t hate his tour life that much. He surprised his fans during the interview by announcing he would be doing one more leg of his Purpose tour. This leg will be a North American stadium tour. It’ll start at the Rose Bowl stadium in California in August and end in Toronto in September.

It should be interesting. His actions on stage and his words online make it seem like he would be happier playing at smaller venues, but I guess money will always come before happiness in Hollywood.

I mean, look at his reaction when Ellen tells the audience they’ll be getting tickets to his show in August. When they jump up and scream, he tries his best to ignore them. You can see the frustration/disgust on his face.