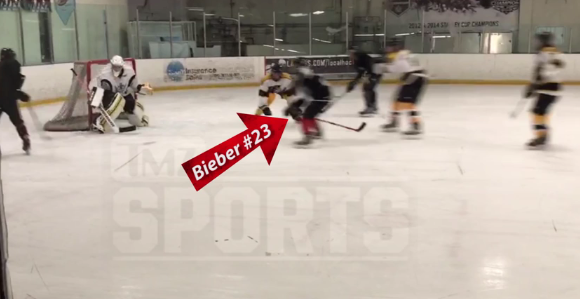 Girls Love A Bad Guy: Justin Bieber Nearly Gets Into Another Fight, And This Time It Was On The Ice…We Got The Video Inside!

This seems like a weekly thing now. Justin Bieber is ready to fight at all times. I typically don’t like making assumptions, but it’s pretty obvious that the Biebs has a lot of anger inside him. When someone pisses him off, even just a little bit, he can’t control himself.

We have another example of this. The 22-year-old singer joined a beer hockey league pickup game at the Toyota Sports Center the other day. Justin is wearing #23 in the video you see above.

As Bieber was coming in for a shot, a defender came down hard with his own stick and smashed Bieber’s before he was able to fire off a shot. It’s a pretty dirty play, and Bieber did not like it at all. He followed the defender around as the ref guided the defender to the penalty box.

And then Bieber and the goalie almost got in a fight. The ref pulled them away before anything serious happened, but it was tense for a minute or two.

I’m not sure if hockey is the best sport for Bieber to be playing right now. He needs a less physical/aggressive sport. Maybe bowling?

I could see it working. He could be the next Pete Weber!