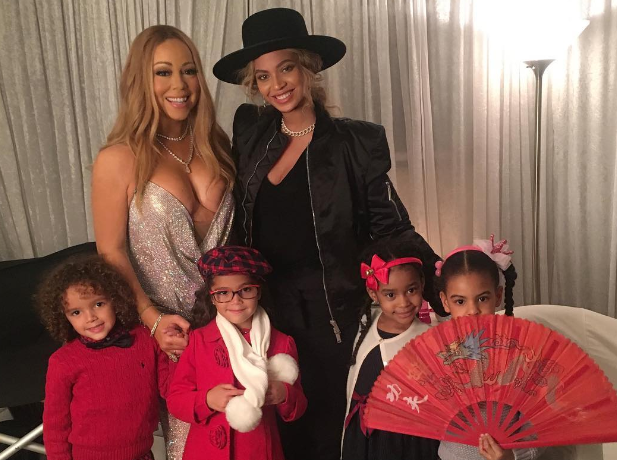 Remember back in October when Kanye West called out Jay Z during a concert. He questioned how strong their friendship was and then said, “Our kids ain’t never even played together!”

A week after he said that, there was a source that came out and said the problem was with Kim Kardashian. The reason North West has never played with Blue Ivy is because Beyonce doesn’t like Kim.

“The last time they hung out, the minute Beyoncé could leave the conversation, she did. They always have lots of awkward pauses.”

Around this same time, another report was released. The report claimed Beyonce is just really protective of her daughter and she doesn’t schedule play dates with anyone.

Beyonce went to see Mariah Carey’s Christmas show at New York City’s Beacon Theater on Sunday, and she brought Blue Ivy and a friend with her.

And when they went backstage, they posed for this photo, which is pretty damn adorable. You can see Beyonce, Carey, Blue Ivy, her friend, and Carey’s twins Monroe and Moroccan.

“Backstage at Christmas time with our beautiful children,” Carey captioned the photo, which has nearly 160k likes on Instagram.

Kim is probably taking this as a slap to the face. Maybe now that Kanye is having meetings with the future president, Beyonce will reconsider her ban. Oh, wait…that’s right. The future president is Donald Freakin’ Trump.