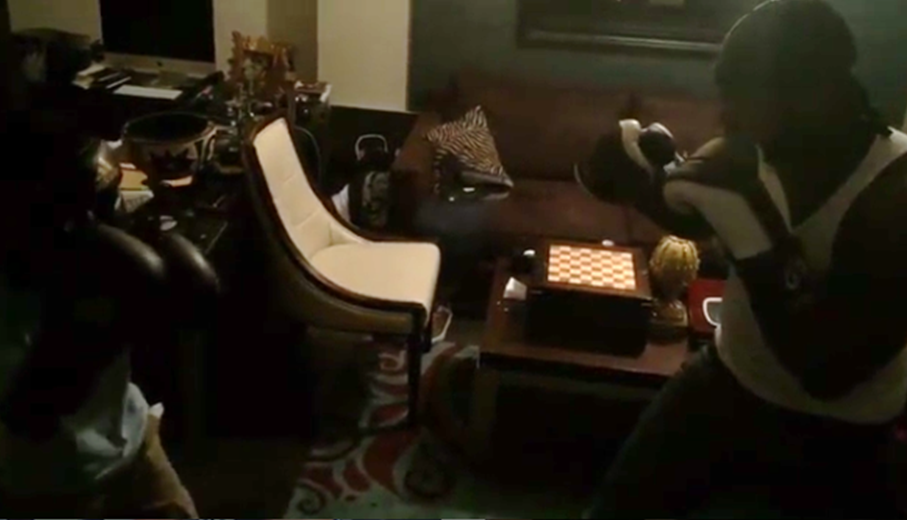 Wow Fif! 50 Cent Gets Labeled As a Child Abuser After Posting Video Of Him Boxing With His 11 year old Son! (Head Jarring Videos) We know that 50 Cent is a huge boxing fan.  Not only was Floyd Mayweather once, one of his best friends, he also owns a boxing promotion company called SMS promotions.  The company filed for bankruptcy in 2012 after signing on some big names including Olympic medalist Andrew Dirrell.

It appears that 50 would like to pass on his love of boxing to his son…but along with the love, he’s passing on some lumps!

In a video that he posted on Instagrm, 50 is shown sparring with his son.  Although it starts off harmless, it appears that the blows to young Davian’s head are pretty impact.  So much so, he appears to be somewhat knocked out by the end…..watch.

He get mad then he start coming.

That video wasn’t too bad….that was just the warm up.  Here comes the main event!  TOUCH ‘EM UP!

Getting my young bull ready,

While some people cheered 50 cent on for being a good father, more people were pissed.

ejustin.oHis is hitting this boy so hard,may fracture his jaw somehow.

tiff.b.chillinHe had to sit down and collect his thoughts ???

mrlhughesWith those Jab to throwing at him… he going to deal with you when he’s older and your old. ??

tandemnation@lex_king_24 @gs300_riotsquad I’d have to agree with the other comments that, that’s a smidgen too hard to be hitn Lil dude. That head gear don’t mean shit if the hit is hard enough. Fuck around and go to sleep later that night and never wake up fuckin around trying to toughin him up too much.

diedrieYou should have done this with the eldest one but I guess you learned your lesson from screwing that one up. Way to go father of the year

dont_hate_on_the_brodieIdk why some ppl don’t like this moment… @50cent You teaching your kid to defend himself w/o having to use a firearm is what all father’s should do. So many kids out here rather shoot you than fight because they don’t know how to fight. I applaud you taking the initiative in showing him how to not be food for the streets + you boxed yourself didn’t ya? Keep up the good shit pimpin

milliondollarrkidThe last punch hurt him this not raising this beatin nigga you crazy!. @50cent go fight @Floydmayweather or @Losangelesconfidential like that you abusing the kid

That’s not really, really his son.  This is the boy Davian.  Davian is a fan that 50 cent basically announced that he was his third son, meaning that he would take  him under his wing and help raise him.  Looks like he’s doing a bang up job!

What do you think?  Too hard or nah?