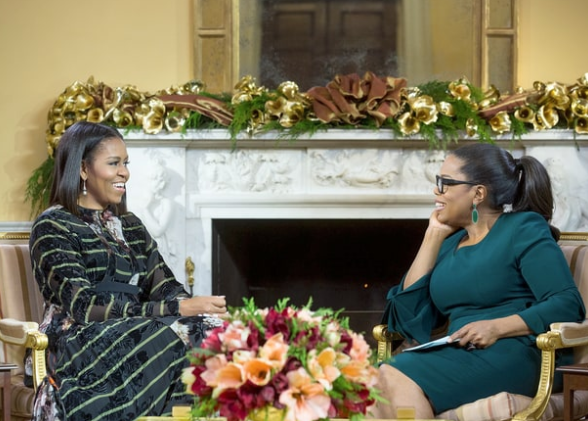 Michelle Obama Sits Down For Revealing Interview With Oprah, Here Are 5 Things We Learned!

In one of Michelle Obama’s final interviews as FLOTUS, she opened up completely to Oprah. The interview, which aired during a CBS special on Monday night, was probably one of the best interviews Michelle has had. You know, if you don’t count the hilarious Carpool Karaoke video with James Corden.

The interview featured several serious moments and important questions, but it was also silly at times and full of hope and joy. One thing that was extremely interesting was the amount of respect oozing off Oprah. Typically, it’s the other way around.

Here are 5 things we learned during the interview:

5. She seriously considered not addressing Donald Trump’s comments about women.

Obama admitted she didn’t know if she should address the comments Trump made during an interview with Billy Bush. You all know the comments, so we’re not going to repeat them, but Obama was conflicted at first. “Do I just go out there and act like that didn’t happen? That’s not true. That’s not honest.”

But then she saw how her daughters were reacting to the comments and she noticed how disgusted everyone was. She couldn’t let it go, “To have a candidate for the presidency speaking about women in such terms was not a normal thing, and so my response, in light of what I was seeing from my female staff, what I was hearing from my daughters, their reaction to it, for me, required a different kind of response.”

4. She feels for young people in Hollywood.

According to Michelle, she was only successful as First Lady because she was a grown up with lots of experience. She knows how to handle the fame. She was prepared. But all the young kids in Hollywood? She feels for them.

“I always said to myself, this would be really hard if I were 20 or 30. That’s why I look at these young celebrities, and I just feel for them, because you have to be grown up enough to know yourself in this. And that just takes time.”

3. Being in the White House together helped make her marriage stronger.

It’s easy to see how the White House could destroy a marriage. The lack of privacy, the stress, the frenetic schedule…it can cause some serious problems.

But Michelle claims it only made their marriage stronger, “The only other person who has a clue about what this is, the good, the bad, is your partner.”

And that’s true. A lot of times, they probably couldn’t go talk to anyone else. It’s not like Barack can call up his old buddy from high school and discuss the meeting he just had. Only Michelle would get it.

2. When she went to bed on election night, she didn’t know Donald Trump had won.

Michelle wasn’t 100% sure that Trump had won when she went to sleep. She figured he was going to win, but she didn’t actually know for sure until she woke up and read the headlines in the morning on her iPhone, “Mentally, I’d already digested it before I actually read it.”

“No, no. Look, that’s one thing I don’t do: I don’t make stuff up. I’m not coy. I’m pretty direct. If I were interested in it, I would say it. I don’t play games. … People don’t understand how hard this is, and it’s not something [where] you just cavalierly ask a family to do it again.”