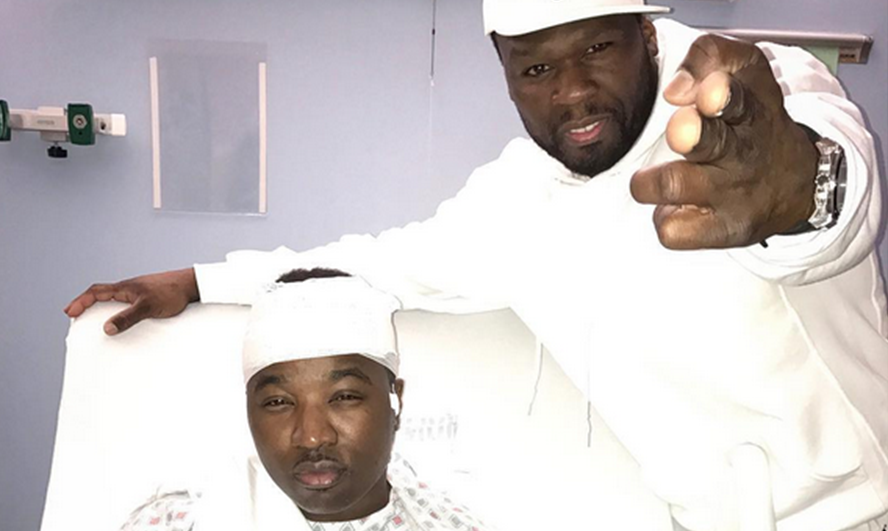 HE SURVIVED! Troy Ave Shot Twice while With His Girlfriend in his Maserati at an Intersection. 50 Cent Shows Up at the Hospital to show Love (Crime Scene and Hospital Photos) This puts all the stolen and leaked video nonsense into prospective.  That’s nothing compared to actually getting killed, which is what almost happened to Troy last night.  It was as close as you can get.

The 31 year old was in East Flatbush on Christmas, on his way to visit his family.  He was on East 91st street and Linden Boulevard around 5 PM when the incident occurred.

According to Troy Ave’s attorney, while he was stopped at an intersection, someone with a hoodie approached his driver side window and begin firing shots.

His attorney, John Stella explained exactly how it went down,

“he looked to his left He saw that the guy had a gun and was about to fire, and he started driving away.

He continued driving and he reached the point where he was bleeding pretty profusely, and apparently a good Samaritan drove him and his girl a couple of blocks the rest of the way to Brookdale”

Troy was hit once in the arm and grazed on the head.  The one that hit him in the arm, struck him in the shoulder and is now lodged in his back!

His lawyer put out an official statement:

“Tonight, Troy Ave was targeted again… on Christmas.  In Brooklyn, going to meet his family for the holiday, he was shot two times. Thankfully, he will survive the second attempt on his life.

As we have said from the beginning – he is a victim. We pray for his speedy recovery.”

You can see from the photos that this was pretty real.  There is blood in the seats of the Maserati and the windows are shout out……<<NEXT PAGE FOR PHOTOS>>