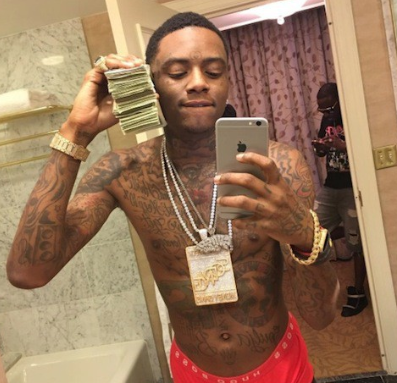 Soulja Boy’s Home In Hollywood Was Burglarized, Over $10,000 In Cash Missing…Is There A Chris Brown Connection?

The last time Soulja Boy’s name was in the headlines this much, 12-year-old white kids from Oklahoma were teaching their grandparents how to crank it, super man it, super soak it and jock on them haters.

As you all know, Soulja and Chris Brown have been feuding for all of 2017 now. They are scheduled to settle the beef inside the boxing ring for charity. You can read more about the past events by clicking on this link.

And during all this drama, Soulja Boy’s Hollywood Hills house was burglarized. The incident happened early on Tuesday morning, according to Los Angeles police. The mystery thief left with over $10,000 in cash and $12,000 in jewelry.

The criminal broke down the door to get inside. Sources say Soulja was not home at the time. He’s been doing a lot of interviews lately across the country, thanks to the Brown feud, so maybe this thief knew the house would be empty. The good news for Soulja is that his house has security cameras at every corner, and one of the cameras got a real nice shot of the suspect, so it shouldn’t take the police long to solve this crime.

None of the reports have hinted at any Chris Brown connection here. Some people have been wondering if this was like a “warning” to Soulja for bringing Brown’s daughter into their beef. That doesn’t appear to be the case though.

By the way, this is not the first time Soulja has been the victim of a break-in. Back in 2008, several men broke into his house with guns and threatened to kill him and his two friends.