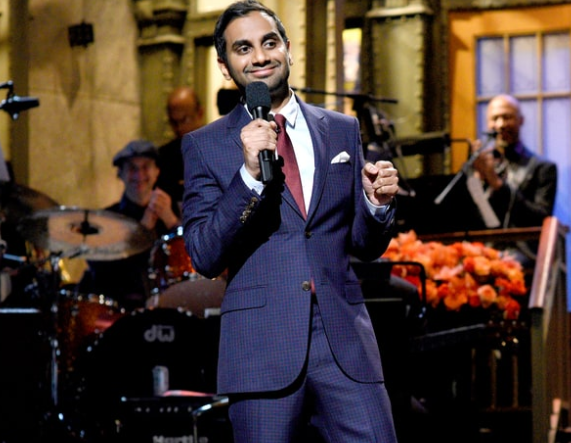 On Saturday night, the hilarious Aziz Anari hosted Saturday Night Live, and during his opening monologue, he spent most of the time talking about our new president, Donald Trump.

You can watch the full monologue at the top of this page. It’s hilarious and has an important message. He killed it. One of the funniest moments was when he compared Chris Brown to Donald Trump.

He told the audience:

“I’m sure there’s a lot of people that voted for Trump the same way a lot of people listen to the music of Chris Brown, where it’s like, ‘Hey, man! I’m just here for the tunes. … I don’t know about that other stuff. I just like the dancing and the music. I don’t condone the extracurriculars. If you think about it, Donald Trump is basically the Chris Brown of politics. And ‘Make America Great Again’ is his ‘These hoes ain’t loyal.'”

And while the audience laughed their butts off, Brown was back at home wanting to beat some ass. He first went on his Instagram and posted a video (which has now been deleted) saying, “I can’t f–king catch a break. This n—a said, ‘Donald Trump is the Chris Brown of politics.’ I swear I’m gettin’ the f–k outta here. Don’t f–kin’ trust what you see. Even salt look like sugar.”

If he would have stopped there, he would have been fine. But he didn’t. Instead, he made Ansari’s comparison look even more appropriate by being a freaking racist.

He reposted The Shade Room’s Instagram video of Ansari’s comments, and added this ridiculous caption, “F–K NO!!!!!! Somebody tell ALADDIN HOP OFF MY D–K!” Good one, Brown. You really showed the world you are NOTHING like Donald Trump.