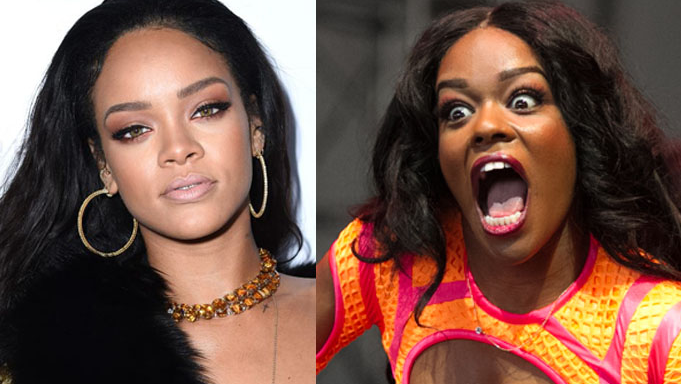 Professional Troll Azealia Banks Gets Into Intense Feud With Rihanna, And Then Posts Her Phone Number On Social Media For The World To See! Why anyone spends their precious time arguing with Azealia Banks is a mystery to me. In the past year, Banks has started arguments with several celebrities, most recently Russell Crowe and Zayn Malik. She appears to enjoy the drama.

And she got a great deal of drama on Sunday when she started a war on Twitter/Instagram with Rihanna. Like most sane Americans, Rihanna was shocked and disgusted to hear about Donald Trump’s targeted travel ban over the weekend.

Banks saw this tweet, and since she has already announced her support for Trump, she obviously had a problem with Rihanna’s tweet.

She fired back with some Trump-like comments that promote fear and isolation.

“As far as rihanna (who isn’t a citizen, and can’t vote) and all the rest of the celebrities who are using their influence to stir the public, you lot really REALLY need to shut up and sit down. Stop chastising the president. It’s stupid and pathetic to watch. All of these confused people confuse other confused people. Hoping the president fails is like getting on an airplane and hoping the pilot crashes.”

Banks doesn’t seem to understand that Trump (the pilot) is already failing and the plane has already crashed. The plane crashed when Trump won the election. No one is HOPING he fails. We are simply watching him fail.

Anyway, Rihanna did the wrong thing and entertained Banks. She went on her Instagram and posted the photo you see below, with the caption, “The face you make when you a immigrant #stayawayfromthechickens #iheartnuggets #saveourhens.” And then Banks got dirty with the feud, as she always does. She posted a screenshot of Rihanna’s photo and attached this disgusting comment to it…

“What rihanna meant was …. ‘I GREW UP PLAYING SOCCER IN A DIRT YARD WITH A COCONUT AND OPEN MY LEGS FOR ANY AND EVERY MOTHERF‑‑KER WHO I THINK I CAN GET TO WRITE ME SONGS OR BUY ME DRUGS. I CAN BARELY PERFORM BECAUSE I LINE MY BROWN BLUNTS WITH CRYSTAL METH AND AM OFTEN VERY WINDED ON STAGE.'”

The the two went back and forth as you will see below: Thankfully it looks like Rihanna is done responding to Banks.

That’s the correct move. As many people have said before: arguing with crazy will make you crazy.