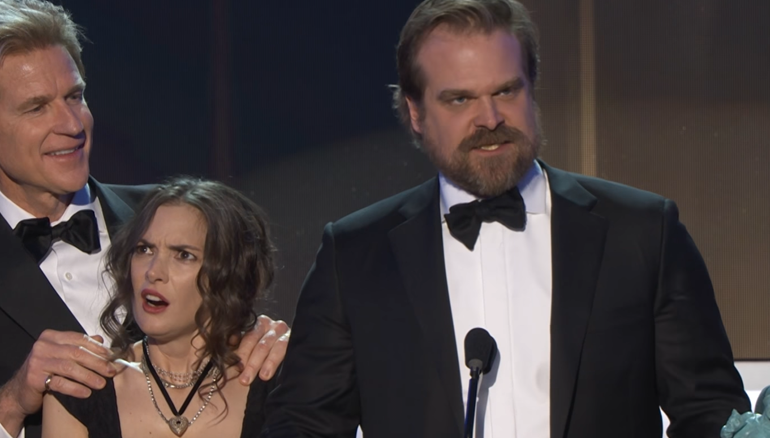 When we think of great acceptance speeches, the first one that comes to mind is Cuba Gooding Jr.’s acceptance speech in 1997 for his Best Supporting Actor win. It was clearly a huge moment for him, and he didn’t care about the music rushing him off stage. This was HIS moment, and the people in the audience freaking loved it. You can watch it again at the top of this page.

It’s been a while since we’ve had such an energetic speech. We have certainly had great speeches since then, but nothing that fills you with such strength that you feel like you could jump off a roof and fly across the country.

Well, David Harbour came to the rescue last night. David plays Police Chief Hopper in Stranger Things. And if you don’t know what Stranger Things is, please open a new tab and sign up for Netflix right now.

Surprisingly the show hasn’t been receiving a lot of awards this season, mainly because it’s going against giants like Game of Thrones and Westworld. It’s in a difficult category.

But during the Screen Actors Guild awards last night, Stranger Things beat the giants and took home the award for best ensemble cast. All the actors from the show flooded the stage, but it was Harbour who took the mic and delivered a speech that will go down as one of the best in history.

You can watch the video below. We also included a transcript just in case you can’t play videos right now, but just a warning, Harbour’s delivery and the reaction from the audience is what makes this speech so special.

“We are united in that we are all human beings and we are all together on this horrible, painful, joyous, exciting and mysterious ride that is being alive. Now, as we act in the continuing narrative of Stranger Things, we 1983 Midwesterners will repel bullies; we will shelter freaks and outcasts, those who have no home; we will get past the lies; we will hunt monsters; and when we are lost amidst the hypocrisy and casual violence of certain individuals and institutions, we will — as per Chief Jim Hopper — punch some people in the face when they seek to destroy the meek, the disenfranchised and the marginalized, and we will do it all with soul, with heart and with joy. We thank you for this responsibility.”