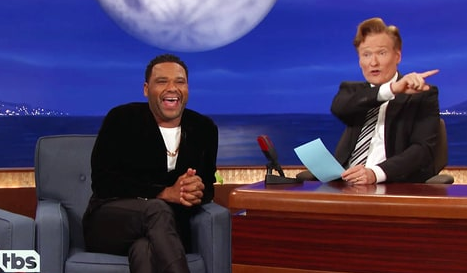 Get Ready To Laugh Your Butt Off As Anthony Anderson Explains How His Mother Taught Him How To Perform Oral Sex…Seriously! (VIDEO)

We have shared a lot of videos from Conan on this site, and the majority of them are from his hilarious remote segments. That’s when he’s at his best.

But occasionally, he’ll also hit it out of the park with an interview, and that was the case on his Wednesday night show. Anthony Anderson (Black-ish) was on the show, and during his interview, he brought up his mother.

And it wasn’t your typical, “My mom supported me. Told me to chase my dreams and never stop,” story. Nah, Anderson’s mother had a more important lesson to share with him. She made sure he and his brother knew how to properly go down on a woman.

“I had just come home from college and we had happened to be sitting around in the family room—not only me, but my buddies and their girlfriends. She not only taught me and my brothers and my boys, but also the women how to do what they needed to do. She would put the videos on and go into graphic detail as to what was happening on the video and what either me, my brothers or the young ladies should be doing.”

This obviously shocked Conan. He couldn’t believe what Anderson was telling him. “What was her motivation?” he wondered out loud.

And that was the wrong thing to ask Anderson…

“My father didn’t know how to eat p—y. [She said] ‘I will be damned if I send my three boys out in the world not knowing how to do that, so it is my duty as a woman to teach you to do this properly, because your daddy didn’t know what he was doing.'”

Well, uh, okay then. How nice of her. We’re sure his wife of over 20 years appreciates it.